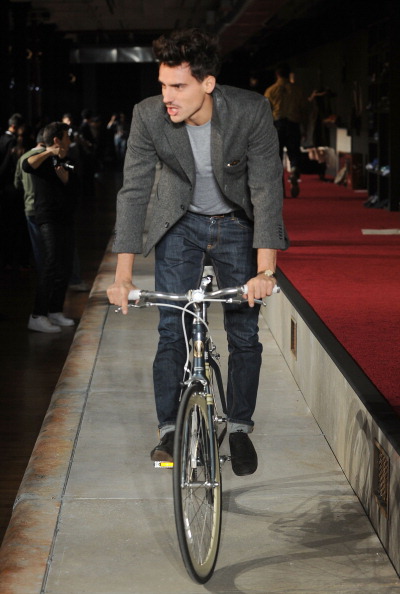 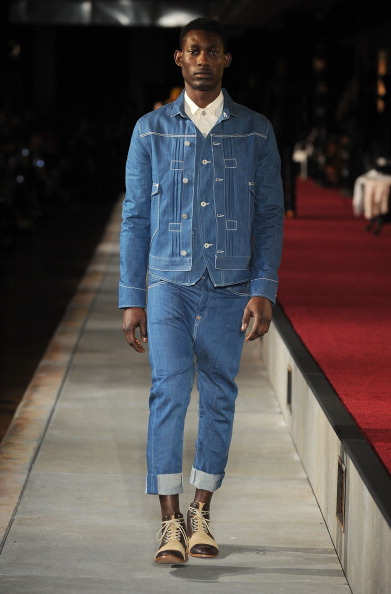 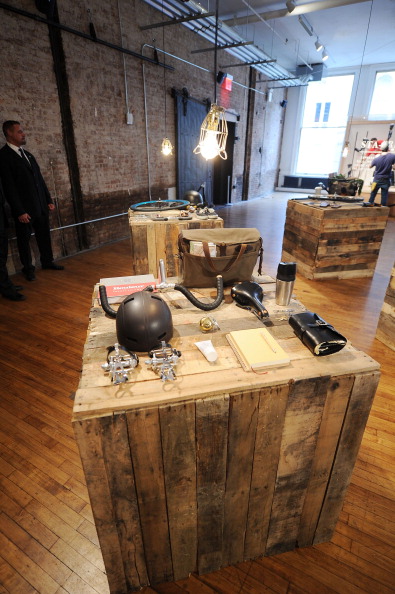 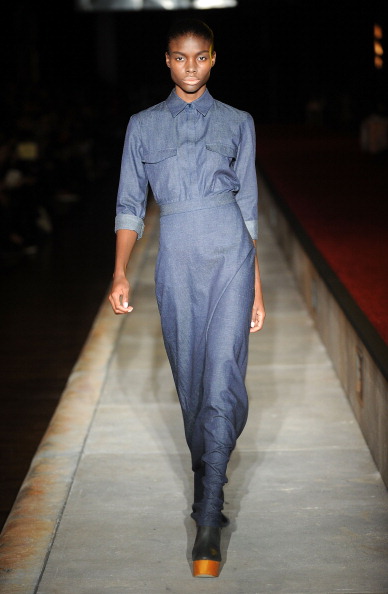 Levi's wearable styles could easily translate from the runway to your closet, if you're cool enough to pull off a denim onesie. (Dimitrios Kambouris/Getty Images)
NEW YORK, NY - FEBRUARY 15: A model walks on the runway at the Levi's Fall 2012 Global Collection Presentation at 82 Mercer on February 15, 2012 in New York City. (Photo by Dimitrios Kambouris/Getty Images for Levi's) 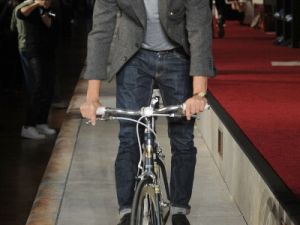 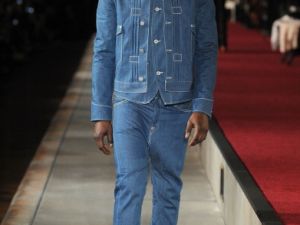 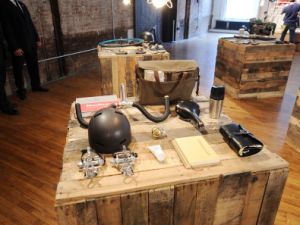 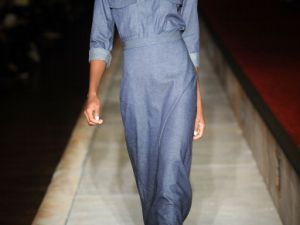 Outside, we were in SoHo.

A throng of hoisted cameras rushed an unmarked elevator, but a frenzied, red-lipped woman with a high ponytail and a clipboard acted as gatekeeper, keeping the onslaught at bay. Somehow, The Observer found ourselves inside.

One of the cameramen broke through to the elevator’s threshold, which was ready to depart for the Levi’s Fall 2012 collection preview. “I need to get my spot,” he told the woman.

“Absolutely,” she said, nodding. But it wasn’t an invitation to ride.

“No absolutely,” he said flatly. “I am Women’s Wear Daily.” He stepped in, gained clearance from someone else with a clipboard, and we ascended.

Inside, we were in Brooklyn.

The huge industrial space was filled with the usual suspects, faces that had become more familiar, even friendlier, over the course of Fashion Week. They all, however, appeared to be happy just comfortably lounging around in denim and beanies. Hunky bartenders in cowboy tuxedos slung Brooklyn Lager, and everywhere were reminders of the brewery’s namesake bourough. Atop a wooden pedestal sat a basket brimming with kale and oranges, surrounded by bike pedals and a crushed can of PBR. A necktied dude with a black coat and crossed arms stood abreast. Presumably, he was guarding the kale, which we, in turn, presumed to be organic.

“It’s very conceptual,” we overheard someone say. “It’s like corporate trying to be hard.”

It certainly was trying, but we loved the chilled-out vibe. For a Fashion Week change, everyone was having fun. Dudes were detonating paintballs into a clear, color-splattered cage, and the photographer set was cornering a trio of ice sculptures — jeans frozen in a crystal clear ice blocks, touting Levi’s record of water conservation. (With all the water they save, they could afford to waste a little in the name of fashion, we guessed.) This whole installation was a decadent appetizer to Levi’s first global show, which, you know, was going to start any minute. Fashion-Week translation: at least an hour. That guy from WWD must have had a great spot by now.

But the wait was worth it, because when the doors opened, we were transported again into an even more intimate Brooklyn setting. The carpeted catwalk cut through a recreation of an apartment’s interior, flanked by coat racks and a claw-foot bathtub strewn with clothes.

Keeping with the whole tiny apartment theme, the show was standing room only, so when the first model emerged, the audience rose to its tiptoes.

Then came the hipsters. As a synthed-up version of “Come Together” roared, models stormed the catwalk like they were marching out of their Greenpoint apartments. A scruffy tattooed guy in boxers pulled on red pants and a checked yellow shirt — a bit ketchup-and-mustardy, but sexy nonetheless. Another scruffy man in a grey jacket carried a bike down the catwalk, rode it down the exit ramp, and cracked a brilliant white smile.

There were overalls, flannel, and a denim maxi skirt (which looked better than it sounds.) The hats by Yestadt resembled the lovechild of a bowler hat and fedora, and they were fantastic. And then, the finale. A bearded man with a banjo and a topknot took the stage, as the earth-toned, contrived-grungy, jean-clad line of models filed down the stage. Bird sounds piped through the apartment. It almost felt like home.

Jey Van-Sharp, a fashion business strategist, told The Observer he loved the show. “I think they know their market,” he said. “They make it very obvious how you can wear Levi’s.”

A good start? Move to Brooklyn.