At the end of his term in June, Scudiery will be one of the state’s longest-serving party chairs.

The following is a transcription of Scudiery’s letter:

“In looking back at nearly a quarter century in politics, you remember sweet victories and frustrating defeats. But what you remember most are the people.  Once the victory night celebration has faded, the speeches have blurred and the music has quieted, the memory is of the people who worked with you, stood beside you and tried to make a positive difference.

“For more than two decades, together we’ve stood side-by-side with Monmouth County and New Jersey’s working families. We’ve stood by those trying to do the right thing, those who work hard to make their children’s future brighter; those who get up every morning and go to work, who struggle to pay the mortgage and their utility bills, to put food on the table for their families; those who attend their places of worship with pride and dignity; those who coach their children’s Little League teams; those who attend the parent teacher conferences.

“The wealthy and the powerful always have someone to speak for them; our party gives voice to those who would otherwise be voiceless. Together we have provided that voice and leadership.

“During my tenure, New Jersey has elected a Democrat every time there’s been a state-wide federal election. We’ve won every state-wide Presidential and U.S. Senate election. We’ll do so again this year.

“I take pride in the ideal that as Democrats we represent all of the people. Our candidates reflect the diversity of the most diverse state in the country. Our ticket this year will reflect that diversity. President Barack Obama, the first African-American President and U.S. Senator Robert Menendez, our state’s first Hispanic United States Senator. We’ve come a long way in 23 years and proven that our Party is open to all. During my tenure New Jersey also elected its first Italian-American Governor and we’ve elected more women to office than any time in our history.

“But as former Speaker of the House of Representatives Thomas “Tip” O’Neil said, ‘All politics is local.’

“Here in Monmouth County we’ve provided outstanding leadership and built from the municipalities up a growing party that has made enormous strides. Our Mayors and Council members are providing innovative, open and honest government across Monmouth County. We took leadership back on the Freeholder Board and are positioned by developing an outstanding local farm team to provide Democratic leadership again.

“During my time as chairman we worked together to take back the 12th Legislative District. We worked to defeat an incumbent Republican Congressman and to elect Congressman Rush Holt. U.S. Rep. Frank Pallone has represented much of our county for 24 years.

“I believe we’ve been successful as a party because people like you got involved for the right reasons, not because they were looking for a title, status or any other aggrandizement. We succeed when we put the people and the party first.

“I urge our Democratic leaders throughout New Jersey to work to stop the infighting and the deal making that pits one group in our party against another. We need to support policies that help the many and walk away from policies that seem to enrich just a few.

“Perhaps my favorite memory of politics in Monmouth County is not of a race that we won, but the one that’s most vivid – my first. John Winterstella and Gene Anthony were candidates for Freeholder in my first year; Jack Manutti and Annie Grant contested the Constitutional Offices. In that year, Surrogate Patricia Bennett was our only Democratic county-wide official. I walked with the candidates every day and night, we campaigned hard for months, and in the end came up a few hundred votes short. But we launched the party in the right direction. We gave it a start.

“After 23 years, I’ve decided to end my term as Chairman of the Monmouth County Democrats. But I know that because all of the work of dedicated, loyal Democrats like you, I will leave it in good hands.

“From the bottom of my heart, I thank you for the honor and privilege of serving the Monmouth County Democrats and all of the people of Monmouth County.

“To our friends in organized labor; everyone who’s ever stuffed an envelope, made a phone call or talked to your neighbors to help elect a Council member or President; everyone who’s given of their time and their money to support our candidates; all of those who have put themselves before the voters and stood up for our party and its principles; all of those who have been selfless in their dedication to a cause that’s right, I thank you.” 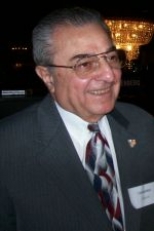