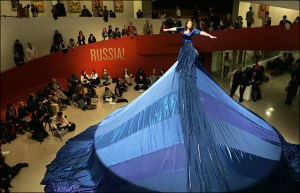 Ms. Abramovic at the Guggenheim in 2005. (Photo by Richard Termine for The New York Times)

This past Sunday, Rufus Wainwright debuted his opera “Prima Donna” at BAM to mixed reviews. The party was undoubtedly good, though, and as The Times‘ Thursday Styles reports, Marina Abramovic was among the many boldfaced names to attend the premiere.

Loudon Wainwright III, the father of the man of the hour, said: “Fear of failing, fear of aging, fear of love, fear of everything. This opera basically has it all.”

Perhaps. But it didn’t have a fear of news photographers. Ms. Abramovic, the performance artist, surprised two of them by asking to see the images they had taken of her. “I’ve never worn blue before so I have to see how I look,” she told them.