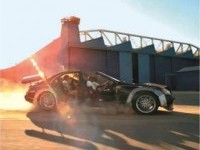 The video for “Otis” by Jay-Z and Kanye West is a play off of all those luxurious hip-hop videos from better financial times, where musicians show off a legion of cars for no apparent reason other than the fact that they feel like it. Just have a look at the parade of Mercedes at the beginning of the video for Jay-Z’s “Izzo (H.O.V.A.).” Or: the best in car fetishism, Jay-Z’s one-time collaborator, R. Kelly, singing “You Remind Me of Something.” What is that something? It’s his jeep.

In “Otis,” directed by the great Spike Jonze, the kings of the throne–as it were–ride around in a particularly tweaked out Maybach that is missing doors and a roof and looks like it’s coming back from battle. As part of Phillips de Pury’s contemporary evening sale in New York on March 8, that battle-scarred Maybach will be up for sale as Lot #1. It is estimated to make $100,000-$150,000.

Proceeds from the sale of the Maybach will go toward the Save the Children organization.

Simon de Pury had this to say in a press release:

“JAY Z and Kanye West are towering figures in contemporary culture. They have greatly contributed to the artificial barriers between art, music, fashion and cinema to come down. Their video for ‘Otis’ became an instant classic. The Maybach they have transformed for it has the starring role.”

It’s Friday, so let’s all listen to “Otis” and start the day off right.