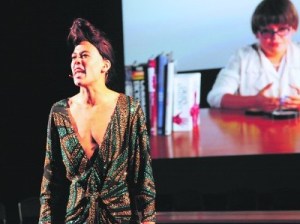 The artist Wu Tsang is a 30-year-old, freckled, transgendered man who dresses Williamsburg-chic but wears his glossy black hair in a high bun that somehow works for the Upper East Side, where he was on Thursday, installing his piece at the Whitney Museum, for the upcoming Biennial. He’s also in the New Museum Triennial, called “The Ungovernables,” which opens tonight—the first artist ever to land that one-two punch, not that he’s the type to care about that sort of thing. He’d just gotten in from Vermont, he said as he clacked past Lenox Hill Hospital in high boots, where he’d been teaching theory at the Vermont College of Fine Art. Many of his students there came to art late in life so the idea is that if you’re making the switch from bolo tie manufacturing to painting, as was the case with one of his students, you’re going to want some Kristeva in your head for good measure.

“I’d totally eat that,” Mr. Tsang said of a Giants cookie by the register at the Eli Zabar’s near the Whitney. He has identified as “transguy” and “transfeminine,” though his voice is the most feminine thing about him. Lilting and authoritative, he always sounds like he’s trying to be polite about how right he is.

While his community organizing and activism can be said to be an element of his art—he’s the type to praise a legal aid organization not just because it works with transgendered individuals but also because it has a nonhierarchical, board-free governance model—video is Mr. Tsang’s primary medium. His new feature-length documentary, Wildness, which premiers at the Museum of Modern Art on Feb. 22, chronicles the history of his involvement with the Silver Platter, a Latino cross-dressing bar near Los Angeles’s MacArthur Park where he threw party-performances with his friends every Tuesday between 2008 and 2010. The “party as art” model has its roots in Andy Warhol, and though Mr. Tsang might not draw the comparison himself, there’s also an element of Joseph Beuys’s social sculpture in his work, where political engagement is the medium.

Mr. Tsang grew up in Massachusetts and his Chinese father, who was born in this country, refused to teach him the ancestral language in the hopes of encouraging assimilation, which meant that he was always something of an outsider, even, or perhaps especially, in his own home. “That missing part became how I learned to relate to people,” he says in Wildness. He did his undergraduate work at the Art Institute of Chicago, where in 2004 he helped organize a project called Pilot TV. The work essentially created a queer and feminist television station (“We called it trans-famous television,” he said) complete with sets, props and cameras, and invited the 250 participants to gather in a three-story space for four days of improv, monologues and sketches.

“We had this big board that was, like, skill-sharing,” Mr. Tsang said. “You’d say, ‘I need two actors!’ and then you’d all get together and you’d pow-wow.”

Mr. Tsang discovered the Silver Platter while doing his MFA at the University of California, Los Angeles. His first offering from the bar is a 20-minute film from 2010 called Damelo Todo (“Give Me Everything”), which tells the fictional story of 15-year-old soldier in the Salvadoran civil war who flees the country and finds a new identity with the transgender women of the Silver Platter. The film was shot in the bar and feels at times like a high school play, told with narration and scenes under lonely spotlights as actors wait in the wings. A smoking soldier belittles the teenager’s manhood, and at the end of the scene he twists out of the bar’s spotlight and, theatrically, stomps away.

In another vignette, he meets a busty blonde cross-dresser, rehearsing with a geisha fan and a knife, who teaches him the new combat skills. Pageantry comes to the fore in the film’s concluding sequence, footage of Silver Platter performers hoisting on bras and having their makeup slathered on in quick, generous scoops. The makeup application is rough, efficient and heavy. Though most of these performers probably identify as women, the take-away here is clear enough—this is no emulation of how any one race or gender makes itself up, but rather something entirely new. When it was screened at his New York gallery Clifton Benevento this past summer, Mr. Tsang paired it with a miniaturized recreation of the Silver Platter to make an exhibition that had New York Times critic Holland Cotter encouraging readers to “keep an eye” on the artist.

Mr. Tsang is interested in safe spaces, both geographic and psychological. The shooting for Wildness overlapped with that of Damelo Todo, so that the former includes scenes of him shooting the latter. His Whitney Biennial installation features a new dual-channel video from the Silver Platter, shown alongside a more extensive recreation of the bar. Mr. Tsang pulled up a picture on his phone that showed the purple walls and glitter curtains, straight out of Damelo Todo.

“I feel incredibly blessed to have shot that film because it was a testament to the level of trust,” he said. “I remember the day they gave me the keys to the bar. It gives me chills thinking about it.”

Wildness is a more straightforward tribute to the bar and tells how it transitioned from what its owners call a “regular gay bar,” described as catering to guys in “Tejano boots and leather jackets” to the Hispanic cross-dressing palace it is now. The bar itself, the film’s narrator, is almost indifferent to the life that “moves in and out of [it] like waves,” though this is Mr. Tsang’s primary concern. At what point does one embrace a melting pot over a safe space? In one shot, an abuelita tries to cross the dance floor as a wide singer with beefy forearms walks it, moving in and out of the old woman’s path to approach members of the audience with dollar bills to stuff into her bust. The old woman tries to cross once, twice, finally finding an opening until, nope, the singer backs into her, bumping her with impressive inertia.

Mr. Tsang’s Wildness parties attracted tourists—the Museum of Contemporary Art, Los Angeles wanted him to do one there —as his documentary almost certainly will as well. As someone wrapped up in theory, it may come as no surprise that Mr. Tsang is concerned with the Silver Platter’s portrayal, and how it is perceived. In Wildness, a daffy journalist for the LA Weekly writes a review of the bar that calls it “a place where a lady-boy can take a load off her feet and wipe a load off her skirt before getting back to business in the back of a Toyota.” The journalist is made to atone for this on camera. Mr. Tsang uses dialogue from the 1990 cross-dressing vogue-fest documentary Paris Is Burning in one of his works that will be on display at the New Museum Triennial and said Bell Hooks’s criticism of that movie—that it showed minorities emulating white culture, for white audiences—was very much on his mind as he made his.

“I really came to this documentary at a point where I was really fraught with making Wildness,” he said, “and there were many parallels that went into the production of the film because I was working in a community that I am a part of, but I am also an outsider to, and there are major race and class cultural tensions that arose from this party that I did with my friends at the bar.

“I think as an activist, also working in grassroots, organizing spaces, engaging in legal clinics. There’s a lot of self-effacing rhetoric that ‘I shouldn’t be the one to speak’ and ‘I’m the person with privilege so I need to step back,’ and there’s all this rhetoric that, when you put it into practice, it becomes complicated. It’s sort of a sword that cuts both ways.”

The New Museum show has two video pieces, Shape of a Right Statement (2008) and For How We Perceived a Life (Take 3) (2012), that use “full body quotation,” which involves an actor hearing lines lifted from other sources through an earpiece, for a final video that is then redubbed like a music video. He used the term as the title of his piece in last fall’s Performa Biennial.

In Shape of a Right Statement Mr. Tsang performs a treatise on rights for the autistic by autism activist Amanda Baggs as he stares at the camera. While his method lends itself to improvisation, he said he actually performed this speech for a year before it was filmed as a final work—a tear rolls down his eye right at the end of the piece. He has no personal connection to autism, but, he explained, homosexuality also used to be considered a mental defect.

“Wu is a very important actor in this group,” New Museum Triennial curator Eungie Joo told The Observer of Mr. Tsang’s inclusion among the other “Ungovernables,” “because he has participated in really important projects of community building and critiquing different kinds of perspectives which have limited the possibilities of understanding.”

Translation, or its absence, has always been key in his work and he thinks the Silver Platter should be right at home in New York, and at the Whitney, which, as he pointed out, is really just a site in the “floaty international art world.”

“I am excited for the Wildness premiere at MoMA, though,” he said. “I was making a list of invites and I got really excited because I was like, ‘All of these people are going to be in a room together?’ It’s all the different reaches of smart awesome people.”

These days, he is in talks to sell Wildness to a major distributor. For Mr. Tsang, to whom politics means so much more than who’s invited to the best parties at Sundance, it’s been an adjustment.

“It is literally opposite brains, the way it works and talks,” Mr. Tsang said of Hollywood. “On the first day, meeting with distributors, they were saying, ‘Say your name, your project, and your take-away.’ And I was like, ‘My what?’ In the art world, could you imagine? ‘O.K., this is great, what’s the take-away?’ The take-away? There is no take-away.”