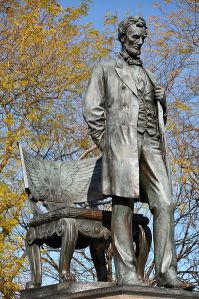 The Metropolitan Museum of Art has acquired a cast of Augustus Saint-Gaudens’s Abraham Lincoln, The Man (Standing Lincoln). The sculptor originally created the piece for Chicago’s Lincoln Park. The Met’s recently-acquired cast is one of a few authorized by the artist to be made posthumously. This particular one belonged to the family of John Hay, Lincoln’s aide who also wrote a 10-volume biography of the president.

The acquisition conveniently coincides with the reopening of the Met’s American art galleries. The piece will rest alongside a few Saint-Gaudens-related pieces, a bronze cast of Leonard Wells Volk’s 1860 life mask and a cast of Lincoln’s right hand, both of which the sculptor owned.