image via the Windows Experience Blog

Microsoft introduced Windows 8 Consumer Preview in Barcelona today. It’s not the final version of the system so perhaps not for the faint-of-heart when it comes to doing scary new things with your tender home PC. Still, the Consumer Preview trended for most of the morning on Twitter, which can be the modern barometer of whether something is a big deal or not.

With Windows 8, the whole experience of Windows has been reimagined. It’s designed to work on a wide range of devices , from touch-enabled tablets, to laptops, to desktops and all-in-ones. We’ve designed Windows 8 to give you instant access to your apps, your files, and the information you care about most so you can spend less time navigating and more time doing what you actually want to do. You can move between Windows 8 PCs easily and access your files and settings from virtually anywhere.

There are several caveats for the eager Windows fan willing to give this new software a shot:

Downloaders of the new system will also need the right hardware. Per Microsoft, the “right” hardware is:

Additionally, the touchscreen features in Windows 8 won’t work if you don’t have a touchscreen computer. That’s probably obvious to most, but Microsoft is being thorough.

Of course Windows 8 is linked to The Cloud, but it also introduces a feature called “Charms,” which sounds a little on the Harry Potter side of things. It’s really just Windows being cute, according to PC Magazine: “This is just a cute Microsoft term for the icons that appear when you swipe from the right side of a touch screen or move your mouse cursor to the bottom-left corner of a mouse-and-keyboard PC.”

There are five Charms and they include Settings, Devices and Search. (Combined, they unlock Bill Gates’s horcruxes.)

A couple of features are aimed directly at tablet users: switching apps and snapping. The Windows Experience blog explains: “If you’re using touch, just swipe in from the left edge to go back to your last app, or keep swiping to go back through several apps. If you’re using a mouse, just move it to the upper-left corner to see your last app.”

“Snapping” is what it sounds like, the ability to slide an app to one side of the screen and snap it there, in case you’re monitoring something like streaming video.

There is apparently much more, including a “new” Internet Explorer, but if you’re feeling brave you can go ahead and download Windows 8 Consumer Preview here.  Good luck and Godspeed. Leave the horcruxes alone, though. 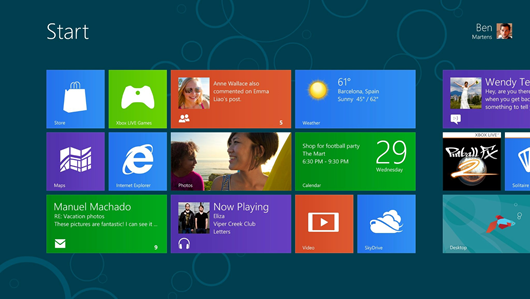