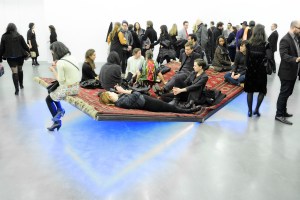 Lounging on "PrayWay" (2012) by Slavs and Tatars. Courtesy Patrick McMullan.

There were people crammed into each room of the New Museum at last night’s opening of “The Ungovernables,” the Bowery institution’s second triennial, a swell of bodies whose size and chaos was only slightly rivaled by the amount of work in the show. There were 34 artists or collectives, displaying work ranging from videos of transvestite acting tryouts (a sort of rough description of Wu Tsang’s For How We Perceived A Life (Take 3), projected in a theater by the coat check) to José Antonio Vega Macotela’s glass case filled with Mexican DVD copies of famous movies (Buenos Muchachos, Tiempos Modernos, El Acorazado Potemkin, etc.). The New Museum, fresh off its most commercial successfully show ever–the Carsten Höller retrospective, with its giant slide that ran down several floors and 3-D goggles and lackluster reviews–is now turning to younger artists from all across the world in their follow-up to 2009’s “Younger Than Jesus” show. There were all kinds of styles, genres and moods represented, a grab bag of anything you could possibly want, as well as some things you probably wouldn’t. But if you didn’t like what was in one corner, you could go look someplace else.

Mr. Vega Macotela was the star of the second floor anyway. In one enclave by the door was a shelf containing “certain merchandise items” (the materials are “undisclosed”) that the artist found, stuffed in plastic bags and then smuggled into a Mexican prison. They looked conspicuously like cocaine, black tar heroin and—on the more innocuous side—uncooked rice. He then had someone inside the prison make a chart of how money and goods are exchanged behind bars. Around the corner, he built an elaborate tequila distillery made of heaters, pipes, glass bottles and crude oil.

Nearby, we found Jerry Saltz in the crowd and asked him what his plans were for Valentine’s Day. “Underpants store!” he said cheerfully, then disappeared by a work that was basically a bunch of cigarettes glued to a sheet of paper.

People in the crowd kept walking through the emergency exits—which in all fairness look a lot like regular exits except for all the red cautionary signals—setting off not only a loud alarm that echoed throughout the museum, but also the security guard standing hopelessly by the door, who proceeded to walk through the emergency exit himself—once again triggering the alarm—to make the member of the mob use the normal exit. We contemplated if this was a piece, but our tip sheet had no word of it.

On the third floor, people lounged on a silk and wool carpet that was on a platform shaped like an open book. The noted absence of painting amidst all this work was made sadder by how pretty Lynette Yiadom-Boakye’s canvases were. They took up one wall and stuck out as much for breathtaking use of light and shadow as they did for being made in an anomalous medium.

Meanwhile, downstairs was starting to look like a very popular singles mixer, with people pressing up against the bar, some actual slow jams playing through speakers and guests scanning the room with eyes that were—uh, hungrier than usual. Again, it was Valentine’s Day. If people hadn’t already visited the underpants store, to borrow a phrase that we intend on using for a long time after this writing, they were looking to get there.

Back on the fourth floor, Lee Kit built a fake bathroom into a windowsill. It was sleek and minimal and took a second to register as what it was, and it provided a nice buffer to the imposing brilliance of Adrián Villar Rojas’ giant sci-fi sculpture in the center of the room that looked like the spaceship in Alien had crashed through the ceiling and then spent a thousand years on the fourth floor collecting dust and becoming an artifact.

Almost hidden in a cubby in the stairwell was the show’s best piece, Dark Day, by Abigail DeVille. There was old cracked wood and painted canvas covering the floor and walls of the room. Beat-up furniture was stacked or hanging just above the ground. But when you walk in further and look up, through a narrow gap that goes straight up to the ceiling, you can see that the chaotic scene continues, with wood and furniture and found objects packed into the space right to the top of the building.  The artist, who told us the piece took three weeks to install, stuck out even among all those people because of a particularly sparkly dress. She said the piece was inspired both by the idea of black holes and the photographs of slums by Jacob Riis.

“It’s about making the visible representation of the invisible,” Ms. DeVille said. “That’s a problem that never goes away.”

One guest, leaving the cubby with an awestruck grin, commented, “It’s better than that slide.”