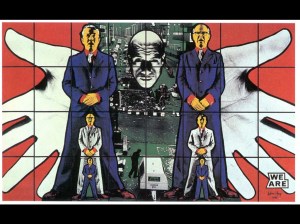 While lauding Cindy Sherman as “one of the most important artists of her era,” Roberta Smith declares that, for her current retrospective, “the Modern blinked. Ms. Sherman’s body of work could have easily handled the entire sixth floor…” [NYT]

Stuart Argabright was going to make the music for Robert Longo’s Keanu Reeves-William Gibson movie Johnny Mneumonic. But it didn’t work out. [WSJ]

Here’s Randy Kennedy on hip-hop-visual-artist-slash-muse-scene-maker (his words) Rammellzee, whose name you should know at the moment. [NYT]

Dushko Petrovich gives 500 words on Draw it With Your Eyes Closed, Paper Monument’s second book. Co-edited by Petrovich and Roger White, the book delves into the hot topic of art pedagogy. [Artforum]

The Mexican Museum is the first of San Francisco’s institutions to be asked to join the Smithsonian Institution’s Affiliations Program. [SFGate]

Greek museums say they will increase security after a series of embarrassing thefts that some attribute to budget cutbacks resulting from the nation’s troubling economic state. [AP]

Gilbert & George will show at all four White Cube galleries in London in the spring. [AiA]