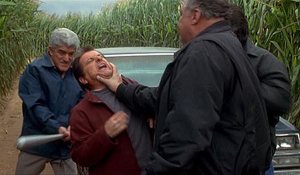 Farah Nayeri interviews Yayoi Kusama in conjunction with her Tate Modern retrospective. “I have been using polka dots since I was a very young child,” Kusama says, when asked about Damien Hirst. “It’s only after that, it seems, that they’ve become popular throughout the art world.” Also, she loves Godiva chocolates and monarchies, and is not a fan of men. [Bloomberg]

Some argue that a recent $6.5 million theft at the Greek National Gallery could have been avoided were it not for the austerity measures that have slashed security personnel by 50 percent. [AMM]

Painter Will Barnet, sculptor Martin Puryear and curator and collector Emily Rauh Pulitzer were honored with the 2011 National Medal of Arts by President Obama yesterday.  [ARTFIXdaily]

Las Vegas, in the spirit of Joe Pesci stabbing a guy in the neck with a pen in Casino, opens a Mob Museum. [NYT]

The Art Newspaper notices the strange provenance of a Lucian Freud. [TAN]

The Kimball Art Center in Utah will be renovated with old train tracks. [Arts Beat]