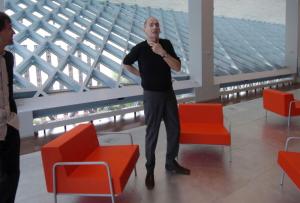 Sotheby’s contemporary art auction in London hauled in $80 million, just above its $76 million high estimate, though far less than the $126.5 million that Christie’s brought in at its sale the night before. Six Richters earned about $30 million. Scott Reyburn notes that there were no paintings estimated above £5 million ($7.84 million) in the sale. Sell-through rate by lot: a healthy 90 percent. [Bloomberg]

Jonathan Jones discusses art and the Black Death. “From 1347 to the late 17th century, Europe was stalked by the Black Death, yet art not only survived, it flourished,” he notes. “So why are modern Europeans so afraid of epidemics?” [Guardian]

The former director of the Palais de Tokyo, Marc-Olivier Wahler, told Le Monde that he regrets never getting to stage an exhibition that would have involved him “being made to disappear [from his post] by a magician who would have changed me into a dog.” He’s at work on converting a school in Saint-Germain into a contemporary art venue, like MoMA PS1 in Queens. [Artforum]

Rem Koolhaus will a build Marina Abramovic performance art museum in upstate New York, where the pieces are “six hours minimum” length. The artist is hoping to raise $8 million to cover the project. [NYM]

Banksy works are very difficult to authenticate. [The Art Newspaper]

The Museum of Contemporary Art in Los Angeles will open a tribute exhibition to the late artist Mike Kelley on Saturday with 23 of his works, as well as pieces by William Leavitt, Douglas Huebler and others that Mr. Kelley donated to the museum. [LAT]