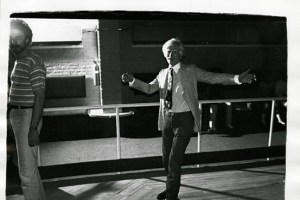 Though Andy Warhol was notoriously private, a new exhibition at the New York gallery Affirmation Arts, “Warhol: Confections & Confessions,” shows 53 images from the Andy Warhol Museum in Pittsburgh, none of which has ever left Pittsburgh. Eight of the pictures, one of which shows Andy Warhol skating, have never before been exhibited. [WSJ]

A bookie in Britain—a land of amazing and bizarre bets—is giving 3/1 odds that the Munch Scream (1895) set to sell at Sotheby’s New York in May will break $125 million. It’s estimated to go for more than $80 million. [FT]

This piece compares Kiki Smith’s early sculptures of the human body to “a corpse, or an AIDS-racked body.” [NYT]

Meet UX, the band of “hacker-artists” that prowl Paris via underground tunnels and fix things. [Wired]

Contemporary art has a “reliance on humor.” Who knew? [FT]

The Los Angeles County Museum of Art’s 340-ton boulder will begin its travels from Riverside County quarry, through four counties and 22 cities, to its final resting place at the museum where it will be the centerpiece of artist Michael Heizer’s giant sculpture, Levitated Mass. [Los Angeles Times]

James Gardner provides a brief history of the Louvre. [WSJ]

Hubert and Jan van Eyck’s “Mystic Lamb” (aka the Ghent Altarpiece) one of the most revered works of Western art, has been photographed in extremely high resolution for the first time, the results of which are visible on a new interactive website [NYT]

Prado’s copy of the Mona Lisa is now on view in Spain. [The Art Newspaper]