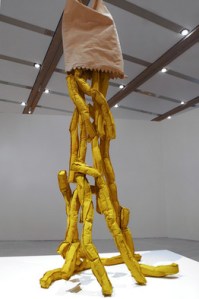 When someone steals a Bansky mural, who has the right to get angry? Annie Shaw contemplates the problems of authenticating Banksys. [The Art Newspaper]

The first Indian auction of Western art by a company based in Mumbai failed to live up to expectations, with a sell-through rate of less than half and total sales just $1.2 million, far below Saffronart’s $3.3 million low estimate. Indian art, in contrast, has been doing well on the block in the country. [Bloomberg]

Is there a backlash against Frank Gehry? He seems to think so. Also, someone sold T-shirts that said “Fuck Frank Gehry” and he purchased a few. [The Guardian]

Roberta Smith reviews Susanne Kippenberger’s biography of her brother, the late artist Martin Kippenberger, and finds it “a tender, reasonably clear-eyed, oddly gripping account.” Ms. Smith writes, “It may sound hackneyed to say that Kippenberger’s life was an extended ­alcohol-fueled performance piece, but in a sense it was—at once self-indulgent, self-­destructive and, oddly, selfless, almost self-sacrificing.” [NYT]

Do Smithsonian Secretary G. Wayne Clough’s 59 trips between July 2008 and July 2011, which included first class seating and travels to a Colorado resort, amount to the theft of taxpayer dollars? [Artinfo]

Jesse Helms on a pack of cigarettes? Here’s a photo of the artist Hans Haacke, one of the pioneers of institutional critique, at his retrospective at the Reina Sofia in Madrid, looking pleasantly amused by his 1990 sculpture, Helmsboro Country, a gigantic pack of cigarettes emblazoned with the face of the late Senator Jesse Helms. [ArtDaily]

Known as Cavaliere, former Italian Prime Minister Berlusconi was criticized for his control over the Italian media, while in office. What was art like during his reign? Dutch artists Rob Hamelink and Nienke Terpsma also known as “F**king Good Art,” give their take in their new book Italian Conversations. [HuffPo]

Claes Oldenburg interview reveals that his retrospective in Vienna is headed for New York, among other things. As it turns out, the food sculptures are autobiographical. “The key to my work is that it’s about my experience,” said Mr. Oldenburg, 83, in an interview in Vienna last month. ‘If I ate BLTs, which I did, I would sooner or later want to create them.'” [WSJ]

FDR’s desk, from when he worked as an insurance executive, is headed to the Franklin D. Roosevelt Library and Museum in New York’s Hudson Valley. [AP]