On a recent evening at Mr Chow, the venerable Chinese restaurant on East 57th Street that has catered to free-spending New Yorkers since 1978, a chef wheeled a metal trolley onto the balcony overlooking the dramatic sunken dining room. Taking a large ball of dough in both hands, he began to pull and massage it, thwacking the mass against the butcher’s block, then doubling it over, letting it twist, stretching, thwacking, twisting, doubling, while the room watched in silence.

This was the “noodle show,” a demonstration of starchy prowess that has occurred every night for 44 years.

The Observer was seated at a two-top, doing research (the best kind) on the federal lawsuit then being tried in Miami pitting Mr Chow against the upstart Philippe by Philippe Chow, a strikingly similar chain started in 2005 by a longtime member of Mr Chow’s New York kitchen staff.

There’s a noodle show at Philippe as well—performed by Mr Chow’s former noodle man, in fact—but that wasn’t what had the guests in tight minidresses pulling out their point-and-shoots when The Observer arrived a little later that same evening (stashing our Mr Chow doggie bag on the way in). Despite Michael Chow’s contention that Philippe had ripped off his concept wholesale, the difference in ambiance was striking.

Whereas Mr Chow was refined and understated, the vibe at Philippe could be described only as bumpin’. The bar was tightly packed. Servers wore red Chuck Taylors. Smashing Pumpkins was blaring on the PA. A woman in a tube top was sitting on a banquette in the entryway, eating out of a take-out container. Everyone was texting.

The excitement that evening turned out to be on behalf of the several New York Giants who were following up their Canyon of Heroes moment with a celebratory dinner in an upstairs dining room, while a photographer working for Cîroq vodka captured the scene.

We approached defensive end Osi Umenyiora to ask what the appeal was. “Great restaurant,” he said.

Maybe so, we thought, but whose?

The Chicken Satay at Philippe—flattened ribbons of tender breast meat the color of Flamin’ Hot Cheetos, gently perforated with bamboo skewers and bathed in a milky, khaki-color gravy—seems an unlikely object of interest for a federal court. It’s exquisitely bland, the latex baby-binky of premium appetizers.

Yet the Chicken Satay, and in particular its marked similarity to the Chicken Satay served several blocks away at Mr Chow, was one of the key matters in the suit. (The 18 pages of testimony about the recipe, which was created at Mr Chow’s original restaurant in London in 1978, remain under seal, but several details that emerged over the course of the trial indicted that the secret sauce involves a lot of cream and a widely available Thai “spice packet.”)

Michael Chow’s complaint, which sought $21 million in damages, alleged that the team behind Philippe, including chef Philippe Chau, restaurateur Stratis Morfogen (also behind the well-received Ciano) and several codefendants, appropriated the Satay recipe and 11 other Mr Chow standbys, the “modern” decor of Mr Chow’s restaurants and even the name Chow—thereby engaging in deceptive trade practices, swiping trade secrets and infringing on the Mr Chow trademark.

In essence, the suit claimed, they’d tried to become Mr Chow—the Invasion of the Body Snatchers of haute Chinese cuisine. “They want to not just clone me, they want to take the whole thing,” Mr. Chow testified on the stand, sporting his trademark owlish glasses and a bespoke Hermés suit. “They want to wipe me—just replace me completely, including my personal identity.”

Philippe countersued, seeking $25 million for defamation following the description of its chef by Mr Chow’s former attorney as a “fraud” in a Miami Herald article. They also challenged Mr Chow’s trademark—“that knife that he uses to try to chop up the competition,” as defense attorney Anthony Accetta put it—claiming the company neglected to defend it. (They cited, among other things, the failure to use a period after M-r.)

Last week, following a mouthwatering four-week trial that featured a T.I. song played in open court and touched on everything from the elusive Qiao-mer, which Mr. Chow described as “know-how, trick, knack, technique, and kung fu” of Chinese cookery, to the difference between a banquette and a baguette (a distinction that bedeviled Mr. Accetta), the jury delivered a mixed verdict. While finding in favor of the defendant on the issues of trademark infringement (which has a three-year statue of limitations) and stealing recipes, they determined that the Philippe team had engaged in “false advertising” and “unfair competition by deceptive conduct.” The defendants were ordered to pay $1 million. Philippe’s counterclaims were rejected by the jury.

Mr. Morfogen told The Observer he was having what he called a “celebratory lunch” with his partners and legal team at a spot near the courthouse when his cell phone began buzzing with texts—friends writing to offer their condolences.

“I said, ‘You got to be kidding me!’” Mr. Morfogen recalled. “That’s Bert Fields’s ultimate spin. If I had lost 15 out of 16 counts, my response to the press would be, ‘I respect the justice system. We lost and we’re going to appeal.’ But don’t embarrass yourself. Have a little dignity.”

Playing catch-up, the Philippe team then issued a press release of its own, in which Mr. Accetta declared that the “landslide victory … serves as a testament to the American dream.” Mr. Morfogen followed up tweeting a link to the Philippe version of events to everyone who tweeted press reports on the case.

He also sent out an open invitation to a victory party at Philippe’s New York location, after which he ended the day on a combative note.

“@PhilippeChow was very touched by the huge turnout tonight ! F the ‘wire tap’ FIElDS and the PUPPET michael chow !” he wrote at 4:21 am, following up a few minutes later with a dig at Mr. Chow’s daughter: “china chow is a joke! Take the loss and be silent!” His wife, former Vogue editor Filipa Fino, got into the act too, tweeting, “Poor @mrchowdining. Cant accept protege success.Would MrBalenciaga b upset at Nicolas? Can’t we have both?”

Mr. Morfogen’s wiretapping reference recalled the case of private detective Anthony Pellicano, who was convicted in 2008 of eavesdropping on various celebrities. Mr. Fields was one of Mr. Pellicano’s clients, but he wasn’t accused of wrongdoing. “I was never charged with anything,” Mr. Fields told The Observer. “I was never even a target of the investigation.”

As to the contention that Philippe actually won the case, he said, “You don’t count counts! When I file a lawsuit, I often have 10 different theories on which I can win. Would we like to have gotten greater damages? No question about that. But who won is about who got the damages, who paid the damages, who was found to have committed a wrong, who was found not to have. It’s just stupid to say otherwise.”

Countered Mr. Accetta: “Of course we’re the prevailing party. It was the best verdict I could have asked for. We prevailed on a majority of the main issues.” 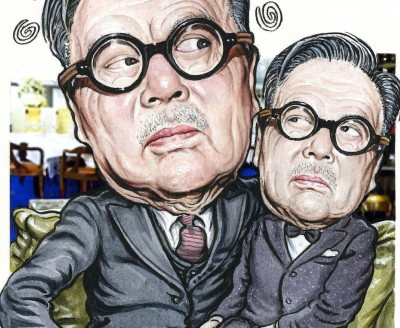