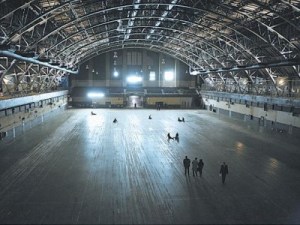 Rebecca Robertson, president of the Park Avenue Armory, was sitting in one of that massive building’s newly renovated rooms, which used to be the locker room of the Seventh Regiment’s Company E, when a booming bass reverberated from the Armory’s drill hall, sounding a little paradoxical in the room’s gaudy late-Victorian interior. Tommy Hilfiger was having his Fashion Week runway show there. A crew was busy building a catwalk and testing the sound. Ms. Robertson said what she liked about fashion crowds taking over the drill hall was that they were “fantasy people and we’re all about fantasies here.”

Taking up an entire city block, the Armory is one of those buildings that is so iconic that many New Yorkers probably take its existence as an old relic for granted. These days, however, it’s changing right under their noses. Last summer, the Swiss architectural firm Herzog & de Meuron finished a massive makeover of Company E and is now at work on a major overhaul of the entire five-floor structure. Better known for avant-garde pieces like the metal, angular Walker Art Center in Minneapolis, the architects are being taken in a more subtle direction by the Armory. Its vast interior retains a 19th-century spirit: in Company E, the walls are oak and over an empty fire pit hangs a large mirror with the profile of a Roman soldier—his face outlined in laurels—carved into it.

As antique as it may seem, the building is alluring to ambitious contemporary artists who work on an imposing scale. Even as museums like the Whitney upgrade to sizable, gleaming, starchitect-designed buildings, it turns out that the landmarked Armory—until recently known more for antiques trade shows—is becoming the venue of choice for artists, from Philip Glass (this month will see a rare performance of Music in 12 Parts in its entirety) to Ann Hamilton (in December, she’ll install a colossal piece in which visitors will be suspended in the drill hall on swings). In May, the nonprofit organization Creative Time will coproduce a show by Tom Sachs, who will use the drill hall for an elaborate fantasy mission to Mars. Early press boasts a spacecraft, exploratory vehicles, launch platforms and a Martian landscape.

“I’ve never seen a public organization start from zero and go all the way to 60—really it’s like 160—as rapidly as the Armory,” said Creative Time’s director Anne Pasternack.

It began as a military depot, but the Seventh Regiment Armory’s cultural side was, in a way, evident from its dedication in 1881, when it began developing a reputation for being partly an elite social club. Its members were Vanderbilts, Schermerhorns and Livingstons, the upper tier of New York society in the late 19th century. That earned them the nickname of the Silk Stocking Regiment. In its early years the Armory was the site of lavish parties—the Alpine Ball, for instance, where the regiment built fake mountains in the drill hall and female guests slid down them on rugs—and performances ranging from vaudeville to highbrow. It was the site of New York’s first modern music festival. Performances included Berlioz’s Grand Requiem Mass and Wagner’s Kaisermarsch, with a chorus of 1,200 voices. Company I, the regiment’s theater troupe, once performed Shakespeare at Madison Square Garden. (After World War I, when armories became federalized, its elitism waned a little.)

As the 20th century progressed, however, the building began to fall into disrepair. Its drill hall became an expo center for art fairs, which lasted until Sept. 11, 2001, when the New York State division of military and naval affairs (it oversees the state’s National Guard) put a halt on all nonmilitary use at New York’s armories on Park and Lexington Avenues. (There had been some bleak rumors of storing bodies at the Lexington Avenue armory, but it never happened.) The seventh regiment armory became a task force command center for all National Guard activities in New York City.

Starting in 1997, Ms. Robertson was involved in trying to buy the lease on the building to turn the space into a cultural destination. Its tenants at the time, part of a group called the Seventh Regiment Fund, were once more using the space essentially as a private club, and were eventually removed from the premises after a court disproved their claims of ownership of the building. After years of back and forth, the Park Avenue Armory, a nonprofit organization dedicated to the arts, was founded and took over management of the building through a long-term lease. Last year was its first full season. With Herzog & de Meuron’s vast revitalization smoothing out the wrinkles and making more and more rooms available for artists and installations, the former home to the wealthiest members of the National Guard is becoming one of the most important cultural centers in the city.

The drill hall’s foray into contemporary art began noisily, in September 2007. Aaron Young’s Greeting Card involved 13 motorcycles burning out on a 72-foot-by-128-foot piece of black plywood, the tires tearing up the surface layer of black paint to reveal a bright orange hue underneath. The result was a multipaneled canvas of violent orange lines—and a lot of smoke.

“It was this motorcycle ballet,” Mr. Young said. He had experimented with the motorcycle burnout format before as an undergraduate student, but never as dramatically. “When they showed me this gigantic drill hall, it gave me the opportunity to see that piece explode,” he said.

Yvonne Force Villareal and Doreen Remen, cofounders of Art Production Fund, produced Greeting Card in association with the Armory. It was “the only venue where it would be possible to realize it,” they recalled. It was early in the space’s renovations and things were still a bit ragtag. It took about six months merely testing the logistics of the project—namely, how to get the smoke from the burn-outs out of the unventilated drill hall. (Eventually, they rigged up huge snaking ductwork tubes that sucked the smoke out of the building and shot it out of a window.)

“The idea that something on a grand scale could be a tabula rasa, that it could be whatever it needs to be, is extraordinary,” said Adam Weinberg, director of the Whitney, which used the Armory for site-specific installations for its 2008 biennial (once again with the help of Art Production Fund). “Most museums don’t have that kind of space. New York has never really had that space.”

The drill hall, like the Tate’s enormous Turbine Hall (also revitalized by Herzog & de Meuron, but with roughly 11,000 square feet to the drill hall’s 55,000), is a miraculous urban anomaly, a space so large and open and with no real commercial focus, it shouldn’t even exist in Manhattan.

Herzog & de Meuron first saw the space after 9/11, when it was all wires and dust. The first phase of the renovation project was to update the building’s infrastructure to make it safe and functional (this, along with the restoration of Companies D and E, cost about $85 million).

“Renovation and preservation of historic structures in the U.S. has mostly been seen as a kind of mimicking,” said Jacques Herzog, “putting a layer on top like a make-up, so it would look exactly as it did when it was new—but we decided to restore the rooms in that we bring back the original layers and nevertheless leave the traces of all the history that have transformed them since the beginning.”

There are now artists-in-residence, an opera-singer-in-residence, educational programs and a steady cycle of installations and shows. The 2011 season, overseen by Kristy Edmunds (who will be replaced in 2013 by Alex Poots of the Manchester Festival), included a sound-and-light installation by Japanese artist Ryoji Ikeda, a massive display of red and white quilts presented by the Folk Art Museum, and the final performances of the Merce Cunningham Dance Company. In addition, art fairs are still held there—the Art Show, the fair of the Art Dealers Association of America (ADAA), will have its annual run next month—and a homeless shelter for mentally troubled women dating back to the early 1980s continues to operate.

“It’s like a little microcosm,” Ms. Robertson said. “There are days where you’ll see a guy in fatigues walking through, then an artist-in-residence. Sometimes a homeless woman will wander down and we’ll have a performance going on—and it’s like: ah, a world.”

Asked if she has a favorite room, Ms. Robertson replied quickly, “Whichever one I’m in.” One never knows what one will find in a given space. In the library, Company I, crammed with computers and desks for staff, Ms. Robertson stumbled upon a framed letter from Theodore Roosevelt casually buried under a stack of papers.

At the end of a long hallway, past a row of old cannons, is Company K, the studio space for the Armory’s artist-in-residency program. Its current resident, the director and designer Julian Crouch (he directed Philip Glass’s Satyagraha at the Met this year), has filled the room with demonlike masks made of tree bark and some fake plush taxidermy elephants.

Through a hallway, Ms. Robertson walked out to a small private balcony. It overlooked the drill hall, where the Hilfiger crew was busy installing fake trees. “They’re turning this into a park. Why not, right? Is that dirt? I think it is. These guys,” and here she motioned back to the company room, “used to have these incredible balls—the Martian Ball, the Egyptian Ball. Everything was always a fantasy here.”