During the course of reporting this week’s cover story on William Boyland Jr., I spent over a month attempting to speak to the allegedly corrupt Assemblyman including sending emails, Facebook messages, multiple calls to his work number and personal cell phone and visits to his office in Albany, his district office in Brownsville and his home in Bedford Stuyvesant. I finally met Mr. Boyland last Saturday night in the lobby of the Hotel Albany where he was on hand for the annual New York State Black, Puerto Rican, Hispanic and Asian Legislative Caucus association weekend.

Upon seeing Mr. Boyland, who was handing his young son money to spend in the hotel gift shop, I immediately walked over, whipped out my audio recorder and introduced myself.

“I know who you are, you stopped by my house,” Assemblyman Boyland responded.

Mr. Boyland declined to discuss the pair of corruption trials against him, the bullets fired at his car last August, or the, at last count, 41 lawsuits filed against him by the State Board of Elections for his failure to file required campaign finance disclosures.

“You have a card or something? I’m not going to do any comment now. I’ll reach out when you get home OK?”

Even though I already left a card for Mr. Boyland on my visit to his house, I gave him another one. He never called.

Mr. Boyland didn’t have much to say to me, but his father, William Boyland Sr., who’s better known as Frank, was far more forthcoming.

I met Frank Boyland at the caucus weekend church service at Wilborn Temple in Albany. Both Boylands were in attendance along with several other members of their family. They sat in a place of honor near the front row. As the choir sang, Assemblyman Boyland stood and clapped to the music. When Reverend Jesse Jackson, who served as guest minister, called on members of the audience who knew someone who had been in jail to stand, the assemblyman rose from his pew. He also stood when Mr. Jackson asked if any members of the audience knew someone who contemplated suicide.

Immediately after Rev. Jackson finished his sermon, the elder Mr. Boyland got up and left the church. He needed a cigarette. Mr. Boyland smokes Winstons that he clenches between his teeth and lights one after the other. I followed him out of the church and, as we walked down the steps and, since I began my latest attempt to quit last week, showed him my stash of nicotine gum  to let him know I felt his pain. Mr. Boyland said he hated not being able to smoke inside and doesn’t understand why people think secondhand smoke can give them cancer. After briefly discussing smoking and my recent experiences living in Los Angeles, home of some of the country’s strictest anti-smoking rules, I pulled out my tape recorder and asked Mr. Boyland about the latest corruption allegations against his son.

“I don’t know the answer to cancer and all that,” he said.

Sensing Mr. Boyland was about to clam up on me, I shifted the conversation and asked him about the many challengers lining up to face his son if the assemblyman survives his legal woes long enough to run for re-election sometime this summer.

“What race? It’s a race out there?” Mr. Boyland asked.

I named some of the candidates hoping to unseat his son and Mr. Boyland dismissed them all.

“Who are these guys?” Mr. Boyland said. “They’re always trying.”

He went on to describe the candidates hoping to unseat his son as “buttholes.” Now that I had Mr. Boyland going, I tried asking about the trial again.

“He beat the hell out of them. Everything you asked, they put it out there. Did he lose? OK, so what’s the question?” Mr. Boyland said.

I explained to Mr. Boyland that I was asking about his son’s current corruption trial rather than the trial he faced last year, which resulted in an acquittal.

Mr. Boyland went on to reference my comments about having lived in Los Angeles to illustrate his belief everyone has some skeletons in their closet.

“If you dig deep enough into your L.A. experience they’ll find something that you did wrong,” he said.

Though court documents indicate Assemblyman Boyland is negotiating a plea deal with prosecutors, the elder Mr. Boyland was adamant in his belief his son isn’t going to plead out after emerging victorious from his last trial.

“You saw, the guy didn’t plea the last time, so what makes you think hell plea on this crap?” Mr. Boyland asked. “Why would he plea if he done beat the crap out of you?”

Mr. Boyland turned the conversation back to discussing the “sons of bitches” planning to run against his son. He said, unlike his son, they offer no solutions for the problems facing Brownsville, specifically the high rate of crime and gun violence. I mentioned the incident last August when shots were fired at the younger Mr. Boyland’s car.

“When the situation gets so bad that they shoot at him, something has to be done,” he said.

Police believe the shooting was random. Earlier this month, an NYPD spokesman told me the investigation is “ongoing.” I asked Mr. Boyland if he had any idea who shot his son.

“I don’t know,” he said, adding rather cryptically, “Knowing me, I would have fixed my own problems.”

As we continued to talk, other people began to depart from the church. Mr. Boyland spotted Robert Cornegy, a Democratic district leader and potential Assembly candidate in Bedford-Stuyvesant.

“How you doing sir?” Mr. Cornegy asked without stopping.

“He’s got you,” Mr. Cornegy said pointing in my direction.

“No, he ain’t got me. He’s here asking me something and, normally, if he wasn’t a nice young man, I wouldn’t even talk to him, but he knows what smoking means,” Mr. Boyland said.

As the crowds continued to file out of the church, a woman came up to Mr. Boyland.

“Excuse me, sorry to break you up,” she said as she pulled him away by the arm.

It wouldn’t be my last conversation with Mr. Boyland. At the gala scholarship dinner later that evening, Mr. Boyland came up next to me while I was using the urinal. He wanted to ask me more about my thoughts on the candidates hoping to unseat his son. Since we were in the bathroom, I didn’t have my recorder handy. After I stepped away from the urinals, Mr. Boyland remained there and continued to talk for several minutes with his hands on his hips.

Eventually, Mr. Boyland  finished up at the urinal and asked me to join him outside for another cigarette. As he smoked, he regaled me with his views on how nanotechnology, solar power and fish farming represent huge opportunities for the State. He said the Governor’s office had approached him about going to Buffalo to research fish farming programs, but he declined because they didn’t offer him any money.

Mr. Boyland told me his son is also an advocate of non-traditional, innovative programs and suggested I talk to him. I let him know about my extensive efforts to get in touch with the assemblyman. He said his son was feeling “harassed” by the press. Casting me a sidelong glance, Mr. Boyland asked if I was “an agent” of some type. I assured him I wasn’t and simply wanted him and his family to have a chance to share their story. Soon after, we shook hands and parted ways. 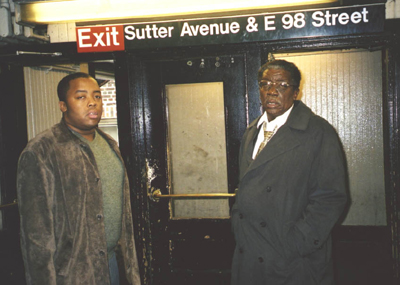