This week a beating red heart stands 10 feet tall over Times Square, carefully nestled inside midtown’s own throbbing center of activity. This new edition to the bustling strip of theaters, restaurants and street performers is a sculpture called “BIG♥NYC.” At first glance, it might look unusual. But that may very well be because it is unusual.

For the past four years, Times Square has been the host of an annual heart sculpture to commemorate Valentine’s Day. The Times Square Alliance selects an architect to design a “romantic public art installation.” This year the sculpture was created by the Danish architecture firm the Bjarke Ingels Group and cost $15,000, paid for by donations and grants. The sculpture will be up from February 6th to February 29th.

This is BIG’s first project in New York. “We like to use emerging architects and new and innovative technology,” Tim Tompkins, the president of the Times Square Alliance, told The Observer. The structure is made up of 400 transparent, LED-lit, acrylic tubes that form a cube around a suspended red heart. The clear tubes reflect the perpetually-flashing signs in Times Square for what comes across as a symbiotic relationship between art and environment.

The non-profit Alliance placed the sculpture inside Times Square to attract the attention of the lovers of NYC as a part of the month long promotion “Free Love in Times Square.” The campaign includes “steamy offers and romantic deals” for the couples of NYC and the chance to have a vow renewal upon the iconic red steps on Valentine’s Day, which viewers without a Valentine can watch online from the obscure comfort of their own home. Also, if people take their photo in front of the sculpture and then post it to Think Energy’s Facebook page during February, Think Energy will donate $1 to the Hope & Heroes Children’s Cancer Fund.

Daniel Kidd, the project leader from BIG, couldn’t be more excited about the sculpture. “Anything that captures the imagination is great,” Mr. Kidd said. Mr. Tompkins said the Alliance chose to place the sculpture in Times Square because “it is the best platform in the world to highlight creativity and make sure everyone sees it.” And rest assured they have seen it. “After the Super Bowl, Times Square was flooded with people and many came together to touch the heart,” Mr. Kidd said.

There’s an intimacy to the interactive nature of the sculpture, encouraging expression through love languages like physical affection. Simple acts such as touching the heart make it glow brighter as the “energy” from passer-byers’ hands is transformed into more light. The more people who feel the sensor at one time, the faster the heart will beat, as if it were actually feeling the warmth of its suitor’s attention. Mr. Tompkins said people have responded to it in kind.

“[They] love it. [Many] people have taken their picture in front of it. It gets people’s attention. It increases digital interactive technology to enhance the romantic experience.”

Brian Brady and his wife, Tiffany, see the heart as a nice change of pace, an opportunity to appreciate more than the blur of a hurried step. “This city is so fast it is nice to see something in the center that can slow everyone down. When people see it they want to stop and touch it,” Ms. Brady said.

Mr. Kidd agrees. He doesn’t limit its heart-like attributes to romantic love between one person and another, but expands it to include that between a city and its constituents. “It is metaphorically the pulsing heart of the city,” Mr. Kidd said. “The heart has been a symbol for love for centuries. This is about people willfully joining to act together. Families, couples, people who have just met, all interacting with each other”

“This is a love letter to the city.” 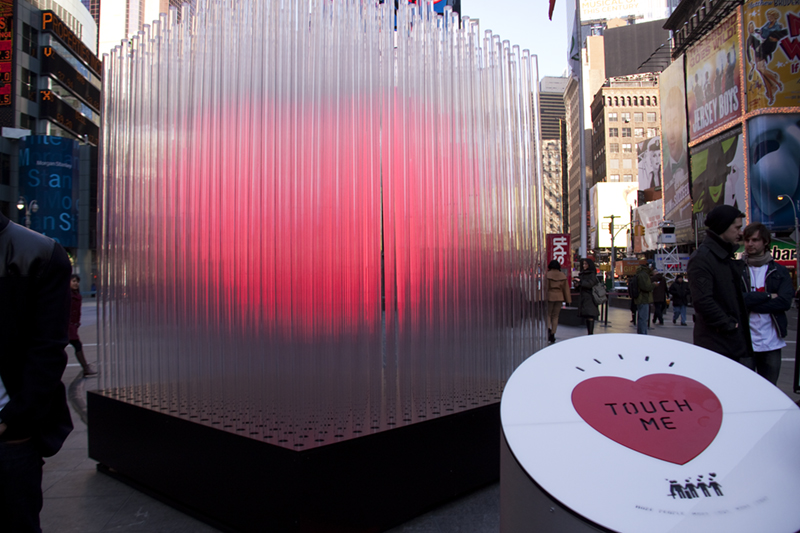