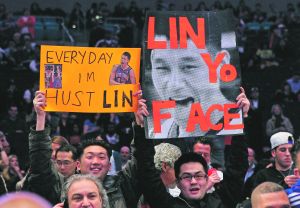 NEW YORK, NY – FEBRUARY 15: (NEW YORK DAILIES OUT) Fans hold up banners in reference to Jeremy Lin #17 of the New York Knicks (not pictured( before the game against the Sacramento Kings on February 15, 2012 at Madison Square Garden in New York City. The Knicks defeated the Kings 100-85. NOTE TO USER: User expressly acknowledges and agrees that, by downloading and/or using this Photograph, user is consenting to the terms and conditions of the Getty Images License Agreement. (Photo by Jim McIsaac/Getty Images)