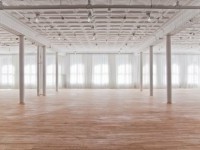 When Stefan Kalmár arrived at the alternative art space Artists Space in the summer of 2009 to become its executive director, he saw plenty of things that he wanted to change.

“The director’s office was a corner office with a vista,” Mr. Kalmár said earlier this month, with a touch of mockery, “symbolizing a petit-bourgeois notion of an institution. There was a real hierarchy.” The robust 41-year-old was wearing a tight sweater, torn near the elbows, over a collared shirt, and was sitting in Artists Space’s third-floor loft on Greene Street, pointing to where various rooms had been. “Next to me was the assistant to the director’s office, and then there was the development office. Like chicken hatches. In this corner was the boardroom, and here was storage and a facility room, and an archive. Everything that an organization doesn’t—shouldn’t—need.”

He had walls torn down, floors sanded. Now, light streams into the exhibition space, and the staff members–there are four full-time employees and four part-timers–work in a cluster of desks in a corner.

He shipped the archive off to NYU’s Fales Library.

“If an organization gets busy with its own history,” he said, “it’s kind of fucked.”

Instead, he’s thinking about its future. Next month, Artists Space opens a 2,500-square-foot satellite location at nearby 55 Walker Street, which will host talks and other public events, small exhibitions and a modest bookstore. If all goes according to plan, there will be a cinema of the same size in the basement by the end of the year.

For a small organization that has sometimes struggled to attract attention—even to stay in operation—the plans are ambitious, and they come at a time when the very definition of the so-called alternative space is undergoing dramatic revision.

Today’s art world is quite a bit different from the one in which Artists Space was founded, in 1972, by Irving Sandler and Trudie Grace, as a nonprofit gallery where emerging artists could show work at a time when, comparatively speaking, there was barely a market for contemporary art.

“There were a lot of old, abandoned or nearly empty, funky office buildings downtown, which had these smoky glass doors that were straight out of Sam Spade’s office in The Maltese Falcon,” recalled art adviser Allan Schwartzman, who was recently named president of Artists Space’s board, along with artist Rachel Harrison. Real estate was cheap then, and artists and curators took up residence.

“In the early 1970s, you had maybe 70 galleries,” Mr. Kalmár said. “But now you have 700 galleries.” In 1973, the year Artists Space opened above the Paula Cooper Gallery on Wooster Street, Sotheby’s held its first major contemporary art auction. The coincidence is weirdly prophetic: These days, nothing sells like new art, with contemporary art fairs proliferating and Christie’s reporting that the category was its largest revenue generator last year.

As the curator Anthony Huberman, who runs a Lower East Side alternative space in conjunction with Hunter College called the Artist’s Institute, noted, major museums, as well as commercial galleries like Reena Spaulings and Alex Zachary Peter Currie, are showing much of today’s most venturesome art. Not only is young art selling, but some of the most radical art is finding willing buyers. “[T]he role historically played by alternative spaces has been made somewhat redundant,” Mr. Huberman has written.

“Alternative space came to mean a particular kind of organizational structure that is now outdated,” said Mary Ceruti, executive director of Long Island City’s SculptureCenter. “I think the other term that is more descriptive and has been able to evolve is ‘artist-run’ space, which is now perhaps ‘artist-centered.’”

So how do alternative spaces evolve to stay relevant, and funded? And what’s their point?

New York’s longtime spaces have undergone major transitions over the past two decades. Many have shuttered, like the Bronx’s Fashion Moda, Thread Waxing Space (founder Tim Nye is now a commercial dealer) and the 30-year-old Exit Art, which will close its doors next month, following the death last year of cofounder Jeanette Ingberman. Others, such as the Alternative Museum and Franklin Furnace, have transitioned into online organizations.

Still others have grown steadily more institutional, like PS1 in Queens, which became an affiliate of the Museum of Modern Art in 2000, after years of financial struggles, and the New Museum, which began in 1977 in a small office in an upper floor of 105 Hudson Street, called the Fine Arts Building at the time, and moved in 2007 into a gleaming, seven-story, $50 million structure on the Bowery designed by SANAA. (The ground floor of 105 Hudson is now an outpost of the Asian-fusion restaurant Nobu.)

Artists Space’s trajectory has been more peculiar. Back in 1977, it was in the same Fine Arts Building, directed by curator Helene Winer, who now co-owns the Chelsea gallery Metro Pictures. “It was the most important exhibition space for contemporary art in New York City,” said Mr. Schwartzman, who helped start the New Museum.

That same year, Artists Space hosted the seminal “Pictures” show, introducing era-defining artists like Robert Longo and Sherrie Levine. In following years it developed a reputation for being willing to court controversy, showing institutional critique work and art related to gay rights and AIDS activism, by artists like Nan Goldin and David Wojnarowicz, whose catalogue essay for one show in the late ’80s led to grant money being revoked.

“The history of Artists Space mirrors the arc of what a critical art institution is thought to be at various times,” Artists Space curator Richard Birkett said. Throughout, it has had a left-wing edge, providing space for groups like Artists Meeting for Social Change and AIDS activists.

But New York’s alternative spaces have life cycles. Their statuses fluctuate with the times. Some curatorial programs click, others fall flat. By the mid-2000s, many say, Artists Space was well into a slump. One dealer told The Observer, “Its program was completely irrelevant.”

Until joining Artists Space, Mr. Kalmár had been directing the Kunstverein Munich—a municipal contemporary art museum. A few years ago, he was having a drink with British artist Liam Gillick, who had moved to New York in the ’90s and whom Mr. Kalmár had worked with on a project. Mr. Gillick, a longtime Artists Space board member, asked him for advice about hiring a new director. Did he have any suggestions?

“It took just one more drink,” Mr. Kalmár said. “And I was like, ‘Yeah … me!’ He wasn’t asking or thinking of me, because he was thinking, ‘Why would you leave a very well-funded institution in Munich?’

“When I took the job in Munich, I always said, ‘Look, if I’m turning 40 in Munich, something went wrong, and you should fire me, as it would mean I have become complacent. Munich is a very, very comfortable city.’”