“The governor was put in office because people liked what he did in office as the U.S. Attorney,” said state Sen. Mike Doherty (R-23). “He has the role of a lifetime to make a significant change here and he’s missing an opportunity to go after what has been documented in neon lights as a corrupt system. I would even say it’s corrupt to the core.”

Doherty was referring to the current schools funding formula, one which, by his estimation, means residents in townships such as Montville pay far more into the system than they get back. Doherty spent the past year traveling around the state trying to generate support for his proposal, which would recalibrate schools funding on a per pupil basis.

He thought Christie would incorporate some of that into his budget address Tuesday, but it didn’t happen.

“I’m really disappointed after I spent a year bringing this to the attention of people, including the governor himself, that the governor did not address this,” Doherty told PolitickerNJ.com. “This is why he was elected. He was elected because people wanted this changed. I’m sorry, the time has come to address this, after two major reports point out the fraud in current schools funding. Elizabeth is just the tip of the iceberg. The governor was elected to address those issues. I start to wonder, as I sit in my caucus, why more Republican legislators have not expressed their disapppointment. I wonder why others don’t stand up and protect their constituents.”

Doherty’s formula tries to force closer together the extremities of what residents in different towns receive from the state per pupil for education: $300 and $400 per pupil in Doherty’s towns, versus $25,000 in some Abbott School districts.

“It’s all built on corruption,” said Doherty. “I told Governor Christie about this and his budget address doesn’t even touch on it as part of schools reform. When you see a wrong you address it. We have a system now that is built on people manipulating the system. I’m disappointed. What good news can I give to my beleaguered property taxpayers?”

Doherty said he isn’t prepared to say he will vote against the budget. But he wants changes.

“We haven’t had one budget hearing,” said the senator. “It’s important the governor hears feedback, and I’m going to work to make this budget better than the slight tinkering at the edges it now represents.” 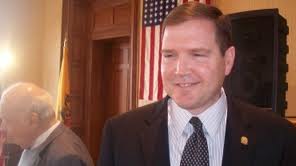