The cops are on the case of your missing phone (Apple.com)

Good news for everyone who has had their iPhone stolen (or probably just lost it somewhere last night when they blacked out, but “stolen” sounds so much less humiliating): The NYPD has officially put out a memo telling its officers about the amazing Find My Phone app, which could allow them to retrieve your missing Apple product from the back of your taxi, where you left it.

“If a complainant is reporting the theft of an Apple Corp. product, ascertain if they have access to Apple’s ‘cloud’ environment AND have previously activated ‘location services’ on said device.”

But there’s a catch. Well, two catches. The first being that you would have needed to activate your iCloud account before you lost–er–had your phone stolen, since otherwise the GPS-based tracking system will not be turned on.

Secondly, the NYPD does not provide its officers with iPhones, which you need in order to access the Find My Phone app. So hopefully someone at the precinct decided not to go with the Droid with the modified Taser function, and will be able to spend their time and taxpayers’ dollars and hunting down missing 4gs.

Or you could save everyone the trouble and just ask your friend to borrow their iPhone,  in the off-chance that you are able to locate the phone by yourself with coordinates that line up to that bar your were partying at last night. Since there are obviously much better uses for Find My Phone, as demonstrated by this testimony on the app’s website:

To start I am a Sheriffs Deputy, i have this device on my ipad and both my wifes and my own iphone 4. She recently wrecked our 2009 Dodge Charger in the country with our 6 month old daughter in the carseat. She was knocked unconsious. I could not reach her so i used the app and tracked her phone. I was an on duty officer who thanks to this very app was 1st on scene at my wifes accident and got her and our daughter the help they needed. Once i had the location I dispatched a medic and assistance while enroute. Thank you thank you Apple. Fyi they are both without serious injuries.

Still, having cops locate cellphone-stealing perps with Find My Phone beats their previous method of just pretending to be drunk. 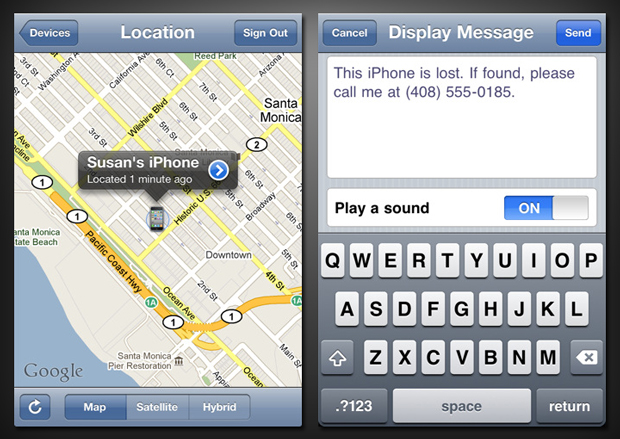