Ah, yes: The Monday New York Times crossword puzzle, routinely mocked by seasoned crossword freaks as the province of entry-level puzzle-doers and amateur intellects. In today’s puzzle, however, those who regularly frequent the blank box page may observe an interesting redundancy, and on a technical level, an inaccuracy. Involving rappers.

The final clue to today’s puzzle, by Tom Pepper, solvable with a three-letter answer:

As blogger and columnist Phillip Bump notes, the same clue appeared back in November. The puzzle, by Jeremy Newton and Tony Orbach, ran on Sunday, November 13, 2011 with the clue to a three-letter answer being:

[Before we proceed any further, it may be wise to enlist herein a SPOILER ALERT for the answer out of sympathy for those who may need one, unfortunate folk that they are.]

The answer is clearly Mos Def*. There are at least two other three-letter “Def”-related clue/answer combinations within the realm of hip-hop puzzle makers could potentially consider:

….Which goes without mentioning all the other “Def” references in hip-hop (like 90s Atlanta-based rap label So So Def, or the “supergroup” of rappers whose 1998 cover of the Sugarhill Gang’s “Rapper’s Delight” became a hit single, Def Squad) or any of the other possible music-related answers that could go with the word “Def” (“Hi-Def,” “Def Leppard,” etc).

Granted, Will Shortz probably can’t remember every single clue that comes under his purview. Surely, some will repeat themselves. But the answer is technically inaccurate, if not simply outdated: The rapper formerly known Mos Def stopped going by that name last year, which he famously noted in a November 2011 interview with Stephen Colbert.

Furthermore, the crossword section has a recent history with a debatable answers to hip-hop oriented clues.

At the beginning of January, a reader email debating the answer to the clue “Wack, as in hip hop” became the subject of joyously heated debate among the oddly inevitable cross-section of hip-hop fans and seasoned crossword solvers. The answer was “ILLIN.” Most hip-hop fans would tell you that someone who is “ILL” (the neutral-action descriptor of “ILLIN”) is certainly by no means “wack,” though there’s room for debate about the transitive verb’s mostly-positive connotations. The fence-sitters at Gawker weighed in on the final definition of the word as “malleable,” an unfortunate entry in their series of outdated but relatively astute hip-hop punditry.

Needless to say, the Times should expand its rap-related hip-hop purview. Should Will Shortz decide to take us up on the matter, we’ve made a Spotify playlist in his honor. May the Times‘ crosswords forever be more ‘def,’ less ‘Mos’ from this day forward.

[*Who, full disclosure, is not a fan of The Observer.] 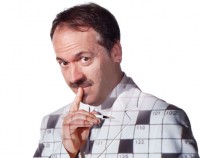