President Barack Obama’s job rating among New Jersey voters stands at 51% approve to 42% disapprove, according to this morning’s Monmouth University/NJ Media Poll, a jump from the 47% to 46% rating he received last October.

The current results are near his summer ratings when he hit 60% after the USA’s capture and killing of Osama bin Laden in May.  The president’s New Jersey rating continues to be higher than the national poll average of 49% approve to 47% disapprove reported by RealClearPolitics.com.

Lack of enthusiasm remains an issue for the incumbent president here in New Jersey.

Just 47% of registered voters say he deserves to be re-elected while 45% say it may be time to have someone else in office.  These numbers are little changed from October.  More than 4-in-5 Democrats (82%) say he should be re-elected and practically the same number of Republicans (84%) say he should not.  A majority (51%) of Garden State independents prefer someone new compared to 37% who say the president has earned a second term.  Obama won New Jersey by just over 15 points in 2008.

“New Jersey is certainly not enthusiastic about President Obama, but he can probably count on its 14 electoral votes come November. His saving grace is that the eventual Republican nominee is unlikely to win over lukewarm independent voters,” said Patrick Murray, director of the Monmouth University Polling Institute in West Long Branch.

Monmouth conducted the poll by telephone, interviewing 709 New Jersey registered voters from Jan. 31 to Feb. 4. The sample has a margin of error of + 3.7 percent. 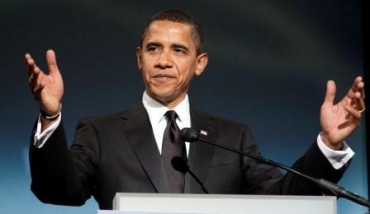