Rick Santorum could have a big night tonight

Members of the Occupy Tacoma group interrupted Republican presidential candidate Rick Santorum during a speech last night at the Washington State History Museum. According to the protester’s Facebook page, three members of their group attempted to “mic check” Mr. Santorum with a lengthy speech criticizing his “abhorrent and medieval” views on women and gays.

“You hold too many bizarre opinions for me to enumerate,” the speech said.

Occupy Tacoma claims two protesters were arrested and one was tased while “protecting” the woman who attempted to read the speech.

Politico, which has video of the interruption, reports Mr. Santorum responded by telling his audience, “I think it’s really important for you to understand what this radical element represents, because what they represent is true intolerance.”

He went on to admonish the protesters to “go out and get a job” rather than “standing here unemployed, yelling at somebody.” His remarks let to chants of “get a job” from the audience.”

Occupy Tacoma announced their intent to “mic check” Mr. Santorum at the event, which was located next to the site of their encampment with a Facebook post made before the event.

“Please do not wear Occupy related clothing or carry Occupy related signs, so that we can actually get into the event and surprise them with a Mic Check!” the post read.

In spite of this advance warning, the protesters were clearly able to pull off their “surprise” mic check. Read the full text of their speech here. 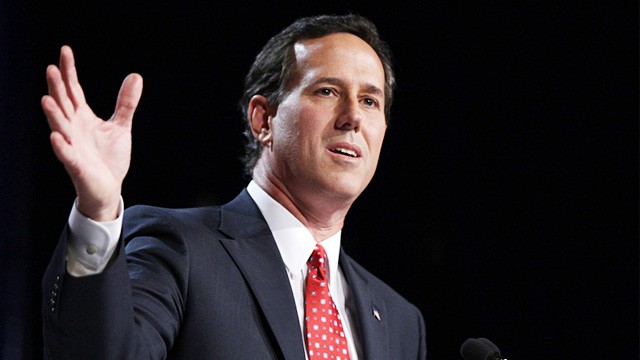