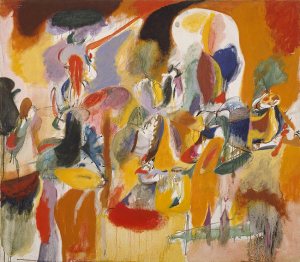 "Water of the Flowery Mill" (1944) by Arshile Gorky. (Courtesy Metropolitan Museum of Art)

Is Pace Gallery moving in on Gagosian’s longstanding representation of mid-century painter Arshile Gorky’s work? In the news release for its upcoming “Mythology” show, which includes the artist’s work, Pace says that it “is honored to work with the Arshile Gorky family on this exhibition.”

The Gorky Foundation, whose board is populated with many descendents of the late artist, has long worked with Gagosian, who has hosted five solo shows of the artist’s work over the past 15 or so years. (An aside: Gorky was Armenian, as are Mr. Gagosian’s forebears.)

A Pace representative told us that the gallery plans to work with the Gorky family on a few upcoming projects, including a three-person show in the fall, which will feature work by Gorky, Picasso and de Kooning, whose estate previously worked with Gagosian and now works with the Glimchers, who own Pace.

The “Mythology” catalogue includes an interview between Pace president Marc Glimcher and Matthew Spender, a member of the Gorky Foundation board, who has penned essays for Gorky catalogues published by Gagosian.

Interestingly, Pace also shows the work of the late Roberto Matta, the painter who infamously had an affair with Gorky’s wife.