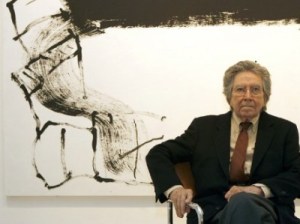 Antoni Tàpies, the painter from Catalan who straddled both modernist and postmodernist aesthetics, has died according to Pace, the artist’s gallery in New York. He was 88.

Mr. Tàpies’s work is difficult to classify, at times suggesting the mood and texture of Abstract Expressionism; at others, as with his so-called “matter paintings,” there is an almost sculptural element to his canvases. Fundació Antoni Tàpies, a museum dedicated to the artist’s work that he founded in Barcelona in 1984, has gone on to become one of that city’s most vital cultural institutions. He had his first solo show in Barcelona in 1950.

Over the course of his career, his paintings became more complex and physically demanding. By the early ’50s, he began using clay and rags in his work; later, he incorporated chairs and dressers into his practice, notably with his Tribute to Picasso (1981-3), which was installed in Barcelona’s Passeig de Picasso. It is made of modernist furniture from around the time Picasso lived in the city, run through with iron bars and encased in a large glass cube that looks more like ice.

In 2010, he was given the title of Marquess de Tàpies in the Spanish nobility. That same year, Fundació Antoni Tàpies reopened after a huge remodeling. In New York, Mr. Tàpies had one-person shows at Dia:Beacon in 2009 and at the Museum of Modern Art in 1992.