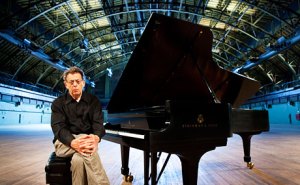 Music in Twelve Parts is, along with the opera Einstein on the Beach, the most famous of Philip Glass’s compositions, but he began it with modest intentions. In 1971, he composed Part I, which was originally meant as its own stand-alone work. Roughly 20 minutes’ worth of layered ostinati comprising 12 polyphonic lines, it is one of the most expressive—and surprisingly slow—pieces of music in Mr. Glass’s repertoire.

“I played it for a friend of mine,” he recalled in the liner notes to his 1993 Nonesuch recording of Music in Twelve Parts, “and, when it was through, she said, ‘That’s very beautiful; what are the other eleven parts going to be like?’” He liked the misunderstanding and took it as a challenge.

From there, each part was written chronologically and the sections began to appear separately in performance throughout the early ’70s, just as the Philip Glass Ensemble was transitioning from starving artists with day jobs into a prolific touring band. The completed work made its debut in 1974 at New York’s Town Hall and has been performed rarely since (there were live reprises of Music in Twelve Parts in New York in 1981 and 1990). For his 75th birthday, Mr. Glass played the nearly four-hour movement in its entirety at the Park Avenue Armory on Saturday night, joined by two people who were around for the work’s composition—Jon Gibson, a member of the Ensemble since 1969, on woodwinds, and Michael Riesman, Mr. Glass’s musical director, on keyboards. An endurance test for both musicians and audience, Music in Twelve Parts is often maddening, but also frequently divine. It made for a pretty unorthodox birthday party.

Listening to the Nonesuch recording, it’s easy to imagine some approximation of a Wagnerian orchestra playing the music, such is the volume of noise produced by the work. The reality, however, is far more humble. There were three keyboardists (Mr. Glass, Mr. Riesman and Mick Rossi), three woodwind players (David Crowell, Mr. Gibson and Andrew Sterman), a live sound mixer, Dan Dryden—a mostly shadowy role that Mr. Glass always insisted was a crucial player in the Ensemble—and Lisa Bielawa singing soprano and frequently stealing the show. Even watching her live, it was hard to believe there weren’t at least two other singers on stage.

The musicians sat in a half-circle, with Mr. Glass and Mr. Riesman at the front, facing one another. It was strange to hear Mr. Riesman give a modest count-in of “1, 2, 3, 4, 1, 2” in music that is this frenetic, often lacking rhythm, melody and, at times, even a key. Part I is a chromatic dirge that has the slightest traces of funk and soul and the pop music of its time (Mr. Glass was ever the enthusiast). That sluggish rhythm, combined with the immediate presence of repetition, is a fine introduction to how the mind reacts to the music when taken as a whole: frustrating, thrilling, boring, hypnotic, infuriating, then thrilling once more before abruptly cutting out and moving on to the next section. The music doesn’t build, nor can an argument be made for its having a beginning or end; each section is like turning a record on at midsong, listening to the needle skip for 20 minutes, then turning the record off again. There are slight but significant changes in a certain line’s tempo, and brief flourishes from an oboe or saxophone that function like punctuation marks, but everything is in a constant state of climax. The changes, when they occur, are always fast and unexpected—so much so that when Mr. Glass, lurched over his keyboard, would signal to the musicians a new motif with an exaggerated nod of his head, he would do so several measures early. Aside from that head-nod, the musicians were mostly statuelike. This is, more or less, molecular music. With the overwhelming repetition of arpeggios and scales, all energy is expended on keeping every finger moving fast. Mr. Riesman looked less like he was playing an electric organ and more like he was typing, 100 words per minute, an important and overdue article.

Eventually, the individual elements of the music become indistinguishable from one another—a melody will repeat for 10 minutes until it enters a realm of nonunderstanding, as when a word is spoken over and over again until it loses meaning. With eyes closed, for instance, one can initially mistake a high E sung by Ms. Bielawa for the same note played by a flute. Characteristic of a number of Mr. Glass’s vocal compositions, the soprano voice sings exclusively in solfège syllables, but in Music in Twelve Parts, he puts his singer through more hell than is typical or fair. Part VII, another chromatic scale that speeds up and slows down in a cycle, uses the voice to follow Mr. Glass’s quickly arpeggiated keyboard line—which is difficult enough, just in terms of the virtual impossibility of ever taking a breath and not even factoring in the range of notes Ms. Bielawa must sing. There were moments of such brilliance in her performance that it was actually pleasant to see her voice become overwhelmed by the music’s difficulty, when a note would become buried under a quick inhale into the microphone. Indications of humanity during the performance were anomalous, but welcome, reality checks.

They were rare, however, because the music does not call for them. Music in Twelve Parts is all about thresholds, and what happens when lines have not only been crossed—they’ve been crossed 20 minutes ago and there is no longer space for excuse or apology. The one moment where everyone fell back to earth completely had no context here. After an intermission, as the ensemble prepared for the last section of music, Mr. Gibson was testing his mouthpiece. The room was entirely silent. Mr. Glass’s hands rested on the keys of his instrument, poised and ready to begin, when Mr. Gibson accidentally blew a loud, out-of-tune note through his oboe. He made an awkward grimace and Mr. Glass sarcastically shook his head, the two bantering with the comfort of a decades-long friendship. The audience’s chuckles turned into loud applause. When the music started up again, it came out of nowhere.