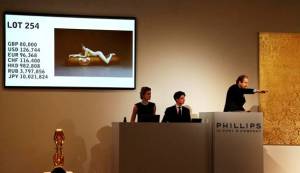 At the day sale, the top seller was Mel Ramosh’s Upmann 1844, which sold for £97,250 ($154,073). Richard Pettibon, Gerhard Richter and Andy Warhol also made appearances and Martin Boyce, winner of the 2011 Turner Prize, set an artist record for a work on paper.

At the evening sale, the top lot was Lucio Fontana’s Concetto spaziale, Attese, which was the only work at the auction to break into the seven figures.