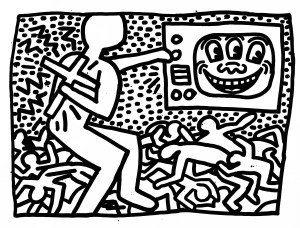 Keith Haring, who died in 1990, was a quintessential New York street artist and is one of the most recognizable figures in 20th century art, known for his dense colorful murals, his AIDS activism, and his Pop Shop. How many revelations about his career can yet another exhibition of his work possibly bring to light? Very many, according to Raphaela Platow, curator of a survey of his early work that opens at the Brooklyn Museum on March 16.

“The Keith Haring who did a lot of video. The Keith Haring who curated many shows,” said Ms. Platow, who is director and chief curator of the Contemporary Arts Center in Cincinnati, where the exhibition was on view in the fall. There are sides of Haring that we don’t know. “He organized 30 shows in four years. And he wrote his own press releases. They’re hilarious. Then he moved to an entire phase where he did nothing but word-based pieces. Works based on words. Different iterations. Lots of collages. Video works that he created and that are about the variability of words, inspired by linguistics.”

“Keith Haring: 1978-1982” presents work from the first four, very raw years of Haring’s career—before he traveled the world, designed a jacket for a Madonna video, went on MTV, and painted Grace Jones’s body; before the Absolut and Swatch ads. It’s the first large-scale exhibition to focus exclusively on the period that began when he came to New York from Pittsburgh to study at the School of Visual Arts, and ended when he created the images that would make him famous, and commercial. The show comes to New York at a time of increased interest in street art. Last year saw the wildly popular Art in the Streets exhibition at the Los Angeles Museum of Contemporary Art, curated by Jeffrey Deitch; it was planned to travel to the Brooklyn Museum, but the museum pulled out for financial reasons. The Haring show may serve as a kind of replacement; he’s considered the spiritual godfather to many of today’s street artists.

In organizing the show, Ms. Platow started with questions she had about Mr. Haring’s work. “I wondered how he got to the point where he could create these amazing large figurative pieces by the time he was in his mid-20s,” she said.

A look at Haring’s journals reveals that there is much to work with in this period. There are examples of his experimentation with words, and the results of cut-up exercises he did à la William Burroughs and Brion Gysin, who were both major influences at the time, as well as examples of gouache cut-outs he did when exploring Matisse’s practice. He documented his artistic breakthroughs. An entry from Nov. 7, 1978, reads, “I have just completed another landmark (for me, that is) painting. It is the first time I ever tried to utilize both arms to control two brushes.” Interspersed with the writing are small drawings of penises, pyramids, dogs and scenes of New York City.

And Haring was an avid video maker. “He recorded his own very performative creations of these abstract patterns sometimes on the floor of his studio or the wall of the studio, literally covered the entire space and videotaped it,” said Ms. Platow. “He considered the video the work of art, not the drawing itself.” His early experimental video works explored the intersection between drawing, space, movement and language. In Phonics (1980), Mr. Haring had his friends, including the artist Kenny Scharf, intone various phonemes, chosen at random. In Machines, he shot a close-up of a mouth formulating sound signals based on Morse code.

It was in 1981 that the imagery now most associated with Haring first made an appearance in his art—the barking dog, the “radiant baby,” the flying saucer, the pyramid.

Some of the pieces in the Brooklyn show, such as a few examples of the early drawings and the word pieces, were included in the Whitney Museum retrospective in 1997, as well as gallery exhibitions like the Barbara Gladstone show during the summer of 2011, shortly after Gladstone began representing his estate, but the Brooklyn show is the largest one to focus on the artist’s formative years, and there are, Ms. Platow said, good reasons to bring the early material out of the vault right now. Her inspiration to look more deeply into Haring’s work came eight years ago, when she was curating an exhibition of street artist Barry McGee at the Rose Art Museum at Brandeis University, and first learned what a significant influence Haring has had on a younger generation. “Like so many artists who draw inspiration from urban culture and the street, [Mr. McGee] was really inspired and informed by Keith Haring. And here I was, a German. I had never even heard of [the term] ‘campy’ before.”

Looking for ways to shed new light on Haring’s career led Ms. Platow to the Keith Haring Foundation, which is in New York and has a warehouse in New Jersey, where she went through boxes and boxes of archival materials. “I went to the warehouse and we opened crates that hadn’t been opened since the late ’70s. We rolled out these amazing large pieces on paper.”

According to Julia Gruen, the foundation’s executive director, Ms. Platow’s visit was “a serendipitous moment.” The foundation was, she said, just finishing work on a monograph that Rizzoli published in 2008, with contributions from then art dealer Jeffrey Deitch and his gallery director, Suzanne Geiss, both of whom had extensive experience with Haring’s art.

It was in the course of putting together that monograph that Ms. Gruen began to realize that the materials should be exhibited. “They should not just be reproduced in books,” she said. “They should be seen.”