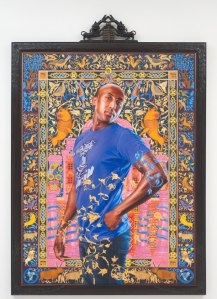 The Jewish Museum announced today that its Kehinde Wiley exhibition, “World Stage: Israel,” which is set to open on March 9, will include a special painted “wallscape” in downtown Manhattan, on either Houston or Canal Street, though the exact location is yet to be decided. The outdoor piece represents a new direction for the Upper East Side institution, museum representative Anne Scher said today, and “a very different way of promoting an exhibition.”

“The Jewish Museum is trying something it has not done before,” said Ms. Scher. The museum’s advertising agency, Our Man In Havana, is overseeing the creation of the wallscape–an oversize reproduction of the Kehinde Wiley painting Alios Itzhak, which was acquired by the museum, and which will be painted by a number of assistants.

Mr. Wiley is no stranger to lower Manhattan, having long shown at Deitch Projects until its namesake dealer left town to become director of the Museum of Contemporary Art in Los Angeles. The artist recently signed with Sean Kelly Gallery in Chelsea.

The exhibition, the latest installment in Mr. Wiley’s celebrated “World Stage” series, will feature 14 large-scale portraits of Israeli youth–he scouted for models in discos, malls and sports bars in 2010 in Tel Aviv and Jerusalem—against a background of Jewish ceremonial art.

Though Mr. Wiley is not Jewish—his father is Yoruba, and his mother is African-American—the show, in its exploration of Jewish culture, embodies the museum’s mission to foster “the enjoyment, understanding, and preservation of the artistic and cultural heritage of the Jewish people.”

In connection with the show, there will be a series of related programming, including a conversation between the artist and pop culture critic and Today Show contributor Lola Ogunnaike, as well as a series of after-hours musical events called the Wind Up, featuring Ethiopian-Israeli hip-hop artist Kalkidan Mashasha and multimedia artist Paul Miller, a.k.a. DJ Spooky.