The Private Equity & Growth Capital Council, which was formed in 2007 by several of the country’s largest private equity firms, quietly formed a political action committee last spring and began making campaign contributions this past summer. New York City Congressman Joe Crowley was one of the top Democratic beneficiaries of donations from the private equity PAC.

Last year, PEGCC’s PAC mostly gave money to Republicans. Campaign finance reports show it gave roughly two-thirds of the $98,000 it spent during the last year to GOP politicians. Republican Congressmen Orrin Hatch and Spencer Bachus got the most money from PEGCC with $10,000 apiece. The Democratic politicians who received the most money from the private equity PAC were South Dakota Congressman Tim Johnson and Mr. Crowley, who each received contributions of $5,000 from PEGCC.

Private Equity has become something of a political bogeyman in this year’s presidential election with Republican candidate Mitt Romney taking a great deal of heat on the campaign trail for his career with private equity firm Bain Capital. Bain was one of the original members of PEGCC, but it has since left the group.

In 2010, Mr. Crowley, who is a member of the House Ways and Means Committee, came under scrutiny for his contributions from the financial industry. That fall, the House Ethics Committee conducted a probe of Mr. Crowley after he collected $23,500 in donations from financial industry executives at series of fundraisers held in late 2009, just before he voted on legislation to impose tougher restrictions on Wall Street. The Ethics Committee dropped their investigation of Mr. Crowley in January 2011 and released a report saying the probe  “raised no appearances of impropriety.”

Mr. Crowley represents the 7th Congressional District, which includes parts of Queens and The Bronx. 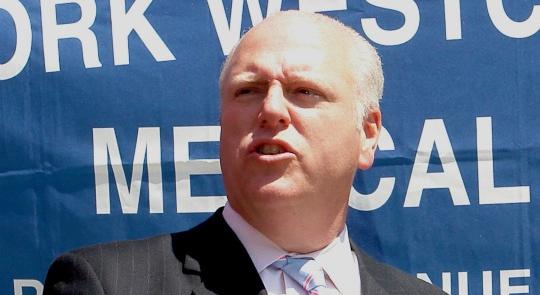