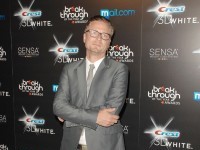 Architect Charles Renfro was standing on conquered territory Thursday night, as he lectured in a screening room at Lincoln Center. The firm where he is a partner, Diller Scofidio+Renfro, reworked parts of the campus a few years back, slicing open some of the stolid modernist buildings, expanding others. “We like it!” he told the crowd of about 50, of the performing-arts Mecca. “That’s why we got the job!” (David Rockwell designed the lecture room.)

The very slim Mr. Renfro was wearing a grey and white striped shirt and a grey jacket, and he was just back from Scotland to give his lecture for the Soane Foundation. He had picked up a cold in transit, but there was no time to waste. “I have two hundred slides tonight,” he said, sounding thrilled. Someone fetched a glass of water, an audience member handed him a Ricola, and he dove into his PowerPoint overview of recent DS+R’s projects.

The High Line, the firm’s greatest hit in New York, flashed on the screen. DS+R tried “to tap into the DNA of that romantic ruin,” Mr. Renfro explained. “With the steel, with the weeds that had grown through the cracks, with the concrete, and not introduce any material that was not already there and manipulate it in such a way that it recalled some of the random, haphazard ways nature was taking over this structure.”

Once avant-garde outsiders, the firm’s partners are firmly part of the architecture elite, Mr. Renfro admitted. “But we do like to work outside the system when we can.” To wit, when asked to create a media installation for an expo over a lake in Yverdon-les-Bains, Switzerland, “We wanted to make an un-media pavilion. Something that is… real and sensual.”

The result was the Blur Building. Thirteen-thousand fog nozzles pumped water from Lake Neuchatel into the air around a steel platform, creating a thin mist cloud. An angel bar served water from around the world. “There was nothing to see and nothing to do, and that’s sort of the point,” he said. “You realize how much of your life is dependent on vision.” The Swiss loved it, emblazoning it on sugar packets, umbrellas and chocolate bars.

“How should architecture respond to the problem of the museum?” Mr. Renfro said the partners asked themselves a few years ago. “Should it be like a peacock, flamboyant and exaggerated like the [Guggenheim] Bilbao, or should it be like the Goetz Collection by Herzog and de Meuron… demure on?” He paused to marvel at his off-the-cuff pun (“That just happened”). “A very placid, background container for the art? No, we thought it should be neither of those.”

He catalogued triumphs that seem to embody that answer: a 39,000-square-foot arts building at Brown University divided into a series of offset loft spaces (they’re split-level, basically, “inspired by Mike Brady of The Brady Bunch”) that look into one another in order to foster interdisciplinarity, and a soaring 62,000-square-foot Institute of Contemporary Art along Boston’s waterfront. “We were able to say to Boston, why don’t we give you a new public place, a new piazza?’” he said. “In return, why don’t you let us…build something quite dramatic?’”

Despite the architects’ recent winning streak—construction is underway on collector Eli Broad’s private art museum in Los Angeles and a Museum of Image and Sound in Rio de Janeiro—not every plan has been embraced. A proposal for a private museum devoted to violent Viennese Actionism work in Neuhaus, Austria, was rejected on the grounds that it was too expensive.

The jury report, according to Mr. Renfro, said that their plan, which called for a long rectangular building to be wedged into a cornfield at a slight angle—deserved to win. “And then it said, ‘But we can’t let it win, because, to bring it in on budget, we would compromise the vision too much.’ … It respected the design so much, in a way, that they didn’t give it to us.

“I actually think it was pretty profound in the end, for them to both acknowledge [the design] and deny themselves,” he continued, “and in a way it is in keeping with the Austrian mentality of self-flagellation and the whole Aktionismus movement, which was really about humil…” He cut himself off. “Anyway.”