Greece was torn by violence Sunday in response to parliament’s passage of a new austerity bill. Over 100,000 protesters, many masked and clad in black, set fire to businesses in Athens–including movie theaters, banks and coffee shops. Looters hit well over 100 establishments. Reuters reports rioters torched 34 buildings.

The legislation that prompted the unrest slashes minimum wage by 22 percent and also cuts worker pensions.

Greek Prime Minister Lucas Papademos defended the cuts, which he said would stave off “uncontrollable economic chaos.” Mr. Papademos also said the program’s social cost would be minimal when compared to “the economic and social catastrophe that would follow” if it had not been adopted.

Violence wasn’t isolated to Athens. Civil discord also spread to tourist enclaves on the island of Crete and the city of Thessaloniki.

Dramatic, raw video posted on Youtube by Russia Today (RT.com) showed Athens firefighters attempting to douse multiple blazes while other establishments burned out of control. Police with full riot gear and shields could also be seen dodging rocks and Molotov cocktails as they battled protesters with tear gas and clubs. 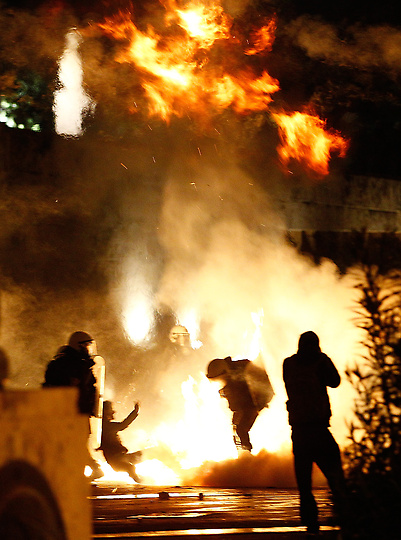