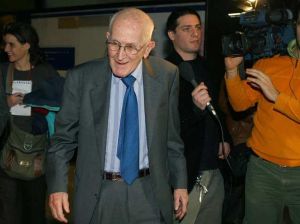 The American antiquities dealer Robert E. Hecht Jr. has died at 92. He had been the subject of a criminal trial in Rome for his alleged involvement in trafficking looted antiquities. Mr. Hecht was accused along with his supposed co-conspirators Marion True (formerly the chief curator of antiquities at the Getty) and the dealer Giacomo Medici of helping in the illicit trade of objects from tombs in Italy into the hands of private collectors and, eventually, museums.

The trial ended three weeks ago and the time limit on charges had expired before Mr. Hecht and Ms. True could be convicted of anything (Mr. Medici was convicted in 2004 of dealing in stolen objects).

The Los Angeles Times, which broke the news of Mr. Hecht’s passing yesterday, spoke with the dealer after his trial had ended:

“Hecht sounded frail but defiant and continued to be coy about the source of his remarkable inventory of ancient vases, statues and frescoes that now reside in museums around the globe.