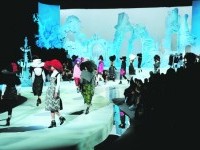 Marc Jacobs has made handbags with Richard Prince and Takashi Murakami, but for his Monday night runway show, he called on New York artist Rachel Feinstein, and the result was quite a sight: a fantastical Brothers Grimm-meets-Dr.-Seuss backdrop for the designer’s latest line.

According to Ms. Feinstein’s dealer, Marianne Boesky, the project came together in just 13 days. “They made sketches, came up with a plan, assembled a team of 50 people,” she told us by phone. The resulting product was a sort of miniature cartoon village with a long, meandering runway. The enormous work is pale blue, which nicely avoids drawing too much attention away from the clothes, and nearly matched the color of a few of Mr. Jacobs’s gigantic, furry hats.

Ms. Feinstein told us by email that she met Mr. Jacobs about eight years ago at Honmura An, the now-lost temple to soba in Soho, at a dinner hosted by Sadie Coles, the London dealer who shows Ms. Feinstein’s husband, the painter John Currin. “I remember that we hit it off instantly,” she said of Mr. Jacobs. “He is a super smart and aware person, and we started talking about intense stuff right away.  He was just starting to get interested in contemporary art but he instinctively knew so much.”

After reaching out to Ms. Feinstein, Mr. Jacobs arrived to their planning meeting armed with pictures of his inspirations–“The Cat in the Hat, Kurt Cobain, Pilgrims, crazy old ladies and a sculpture I made called Puritan’s Delight,” the artist explained. She brought her own ideas: “I showed him books on Piranesi’s etchings of Roman ruins and some rococo fantasy drawings of grottoes, etc., and we went from there.”

Following their initial meetings, Mr. Jacobs left Ms. Feinstein alone to work her magic. “Marc, as far as I know, didn’t see the set until around 6 p.m. the day of the show, and the doors opened at 7:30 p.m.,” she told us.

At the dinner following the show, Ms. Feinstein said, the collaborators discussed how “it makes perfect sense for a fashion designer like him to ask an artist to design his set now as the the artists once made the sets for Ballet Russe years ago. That art form used to be the most cutting-edge thing out there. Now it’s fashion and art, not fashion and dance.

“I keep writing Marc texts telling him how much I love him,” Ms. Feinstein added. “The fact that he trusted me so blindly fills me with emotion.”