Rick Santorum and Mitt Romney at the debate in Arizona. (Photo: Getty)

Mitt Romney and Rick Santorum argued over the “Obamacare” and “Romneycare” health plans during the GOP presidential debate in Arizona last night. Mr. Santorum brought up the issue after the candidates discussed the controversy over President Barack Obama’s contraception coverage rule, which would require schools and hospitals with religious affiliation to allow employees and students access to health plans that cover birth control.

“We were talking about this issue before of religious conscience and protections, but the whole reason this issue is alive is because of the bill that you drafted in Massachusetts, ‘Romneycare,’ which was the model for ‘Obamacare’ and the government takeover of heathcare,” Mr. Santorum said to his rival. “There was a study that just came out about ten days ago–two weeks ago, that listed 15 ways in which ‘Romneycare’ was the model for ‘Obamacare.'”

Mr. Santorum went on to say the similarities between the health plan Mr. Romney instituted as governor of Massachusetts and President Obama’s healthcare reform plan, which conservatives commonly call “Obamacare,” make him a poor choice for Republicans in this election.

“It would be a difficult task for someone with the model for ‘Obamacare,’ which is the biggest issue in this race of government control of our lives, to be the nominee of our party. It would take that issue completely off the table,” Mr. Santorum said.

“First of all, let’s not forget that, four years ago well after ‘Romneycare’ was put in place, four years ago, you nearly endorsed me,” Mr. Romney said to his opponent. “You went on Laura Ingraham and said, ‘And this is the guy who is really conservative and we can trust him.’ Let’s not forget you said that.”

“Under the Tenth Amendment, states have the right to do things that are in their best interest, and I know you agree with that,” Mr. Romney said.

He also said his health plan was substantially different from President Obama’s.

Mr. Romney finished by blaming Mr. Santorum for causing “Obamacare” because he endorsed former Senator Arlen Specter in his race against a more conservative candidate, Pat Toomey in 2004. Five years later, Mr. Specter switched to the Democratic Party and voted for the president’s healthcare reform plan.

Mr. Santorum responded by saying there was no question President Obama used Mr. Romney’s health plan “as a model for taking over this healthcare system in America.” He also defended his support of Mr. Specter as “the right thing for our country,” because he said it helped put conservative judges in the Supreme Court.

“Why I supported Arlen Specter, number one, because Arlen Specter was a senator who was going to be Chairman of the Judiciary Committee at a time when the most important issue that was coming up in the next session of Congress was 2 to 3 Supreme Court nominees that were going to be available, and one, and maybe two of them, or maybe even all three were going to be out of the conservative bloc,” Mr. Santorum said. “He defended Roberts, he defended Alito. We have a 5 to 4 majority on the court. … I did the right thing for our country.” 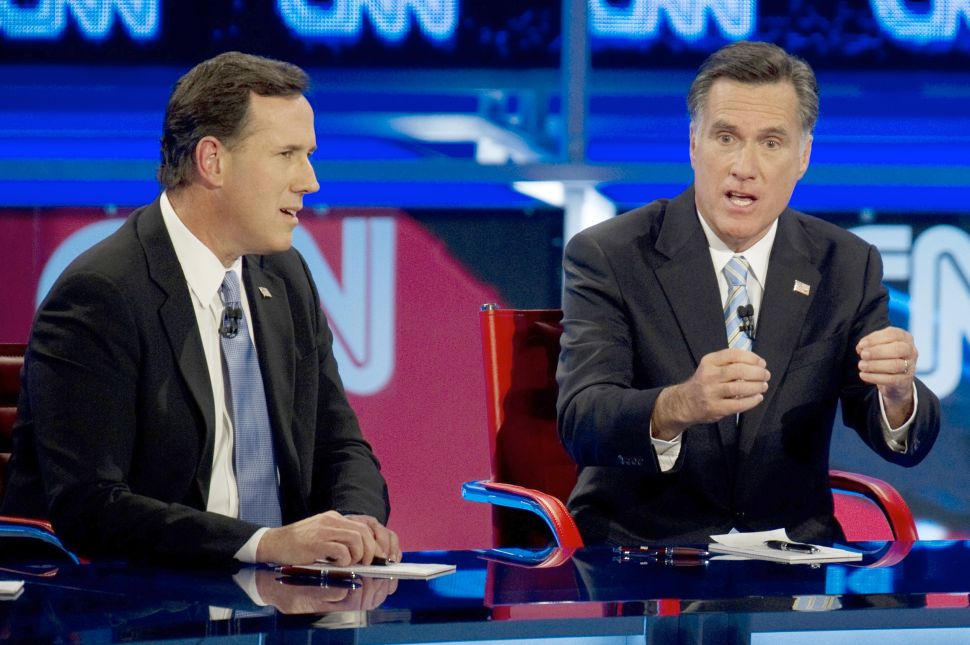