Political gray eminence and true living symbol of dignity and propriety Roseanne Barr announced Thursday that she will be a Green Party candidate for president. Ms. Barr, noted for her sober and rational public persona, has been a strong supporter of the party for years.

According to Ms. Barr neither major party is doing the job. Republicans and Democrats, said Ms. Barr in a widely-reported statement, “are servants–bought and paid for by the 1%–who are not doing what’s in the best interest of the American people.”

Ms. Barr is serious about her candidacy, stating in paperwork submitted to the Green Party that she will “barnstorm American living rooms” and that the “mainstream media” will not be able to ignore her.

Roseanneworld.com, Ms. Barr’s website, has been converted to a red, white and blue design with a link at the top of the page to the Green Party Watch Presidential Poll–in which Ms. Barr is currently running second to Jill Stein of Massachusetts.

Just below Roseanne World’s link to the Green Party poll is the following statement, related to this blog post: “Mayan prophecy told us that Decenber 21st, 2011 was the date when Patriarchy would completely die off the face of the earth, and that January 24th, 2012 – Divine Matriarchy would descend upon humanity. ‘The Temple of The Great Mother’ is the first sacred woman space to be dedicated in this new Time.”

Ms. Barr has begun answering questions on her Twitter feed regarding plans for her administration, should she win:

@jadedamber i will use the powers of the presidency to make sure that every american has a job and free health care.

We can only hope Ms. Barr will be included in as many debates as possible during the long run up to November. 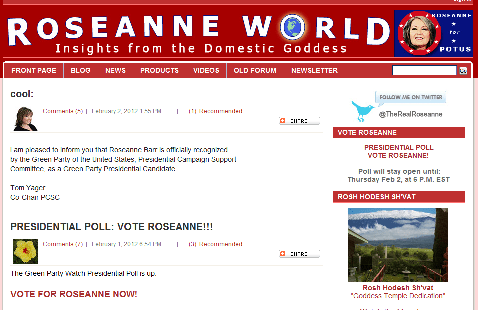