Proving that they take themselves way more seriously than the MTV Movie Awards, the Academy of Motion Pictures warned prankster Sasha Baron Cohen this week that he could not attend the Oscars in character from his latest film. According to an official statement from an Academy spokesperson, “The red carpet is not about stunting.” As everyone knows, the red carpet is only to reinforce our country’s love of Angelina Jolie, Brad Pitt, George Clooney, and our annual token African-American newcomer, up for a statue for their supporting role in a film starring much bigger celebrities.

Was Mr. Baron Cohen, who co-starred in Hugo, even planning on attending as Admiral Gen. Shabazz Aladeen from  The Dictator, a mockumentary about a Middle Eastern tyrant from the fictional Republic of Wadiya?

Well, now that the powers of be say that he can’t do it, the British comedian is going to milk all the publicity from this non-scandal as possible. And he’s going to do it in character. On the Today show. Poor Ann Curry.

Here’s the “official statement” from the Admiral, as uploaded to YouTube today. It begins, “Good morning Great Satan of America! How are you? I am fine.” And it just gets better from there…


Then the Admiral phoned into Today, demanding his tickets be returned:

“The only movies shown in my country are the ones written and starring me. I recently remade The Kings’ Speech, except my character had no stutter and sided with Hitler.”

With all the free publicity this has brought to his new movie, it’s not inconceivable that Sacha Baron Cohen paid the Academy to ban him. And we’re not so sure he won’t show up as Shabazz Aladeen anyway. If they kick him out…so much the better, right? Any press is good press, if you’ve made a career out of punking half of Hollywood. 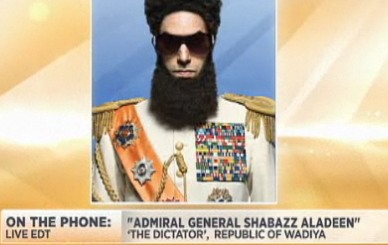