Georgetown law student Sandra Fluke talked to The Politicker today about her rejection from yesterday’s House oversight committee hearing on President Barack Obama’s controversial contraception coverage rule. House Democrats wanted Ms. Fluke to be a witness at the hearing, but the committee’s chair, California Congressman Darrell Issa, denied the request and said she was ”not found to be appropriate or qualified.”

Ms. Fluke, who was a former president of the Georgetown Law Students for Reproductive Justice, planned to share testimony describing how students at her school would be impacted by the policy, which would require religiously affiliated schools and businesses to give students and staff access to insurance plans with birth control and abortion coverage. Ms. Fluke said the rule “would be just really, really huge for women at schools like Georgetown” because being denied contraception coverage “impacts them economically, emotionally and medically.”

“In terms of the financial consequences, it can cost up to $100 a month or even more and that’s $3,000 approximately over law school,” Ms. Fluke said. “For a public interest student, that’s how much we make in a summer, so it’s just an incredible financial burden for women.”

Critics of the contraception coverage rule say women working or attending school at institutions with religious affiliation should seek contraception through clinics, but Ms. Fluke argues that isn’t feasible.

“Especially in this economic recession, clinics are severely underfunded. They’re having to cut their hours, and cut their staff and some are closing their doors and women are being turned away,” she said. “And you know, let’s not forget that we have state and federal government officials attempting to defund these very clinics and then turning around and saying that that’s where women should go instead of having this policy.”

Because Ms. Fluke was rejected from the hearing, there were no female witnesses on the panel, which has angered several lawmakers including Senator Kirsten Gillibrand and Upper East Side Congresswoman Carolyn Maloney.

“There need to be women represented, but what’s more important is not just that it be a woman, it needs to be a woman speaking on behalf of the women affected by the policy,” Ms. Fluke said. “So, the second panel included two women, but they were not there to talk about the lives of women who were affected. That’s the real point, it’s not just about demographics.”

Generally the first panel at a House hearing receives far more attention than subsequent panels. Congressman Issa has argued Ms. Fluke’s testimony did not address the topic of the hearing, which was religious liberty rather than contraception.

“He said that this is not a hearing about women’s rights, or reproductive rights, or contraceptives and health. That’s just a really stunning comment,” Ms. Fluke said. “While I understand what he meant by that, it’s a very good demonstration of the fact that you can frame an issue very narrowly if you want to include some voices and exclude others. What it comes down to is, Chairman issa has power to decide whose voices were heard by the public and by the members of Congress, and he chose to exclude women’s voices.”

Following her rejection from the panel, Ms. Fluke said she doesn’t have “any specific plans at this time” to try to communicate further with Mr. Issa.

“I felt that the dismissive way he referred to me and to the women I wanted to represent was all the communication I needed,” she said.

Since Ms. Fluke attends school in Washington D.C., we asked her what she’d say if she ever runs into Congressman Issa.

“Well, my Sunday school teacher taught me that if you don’t have anything nice to say, don’t say anything at all,” Ms. Fluke said. “I think I would just say hello and wish him a good day.”

Read the testimony Ms. Fluke wanted to present on the panel here. 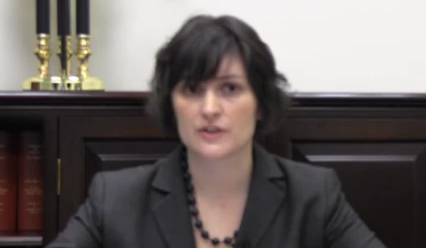