It’s a testament to how big Linmania has become when Saturday Night Live takes a break from opening their show with a political parody in order to address the racial issues surrounding the Knicks’ point guard.

On this weekend’s episode, the first sketch of the evening was a play on the double standard of talking about race in sports: while talking about Jeremy Lin during New York Sports Now segment, Jay Pharoah and Keenan Thompson cracked about “Me Love You Long Time” and “Wax on, Wax off, Mr. Miyagi!” Meanwhile the Caucasian Taran Killam got blasted any time he tried to make a similar joke about an African-American player.

Funny! And relevant, thanks to the ESPN-shaped elephant in the room that SNL writers must have hastily written into the sketch in order to make the comedy bit work.


The offending article on ESPN.com went up Friday, making it doubtful that this bit originated with the “Chink in the Armor” headline that led to the firing of its writer and the suspension of anchor Max Bretos, who had used the phrase during a broadcast on Wednesday. (In fact, that phrase is never mentioned in the sketch, though Bill Hader does single out ESPN for its racist commentary.)

Meaning that unless the segment was made up out of whole cloth in 24 hours, Saturday Night Live‘s writers can be credited with predicting and parodying the “Sportscaster who is only racist when talking about Jeremy Lin” character while the rest of us were still wondering if the ESPN.com gaffe meant that we could no longer make terrible puns with Mr. Lin’s last name. 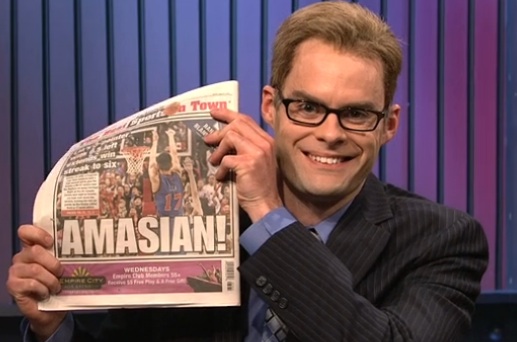