Manhattan Borough President Scott Stringer and Councilman Jumaane Williams held a press conference outside City Hall yesterday where they called on Mayor Michael Bloomberg to end the NYPD’s controversial stop-and-frisk policy in the wake of a report by the New York Civil Liberties Union showing the police department stopped and interrogated a record number of people last year. The NYCLU report showed the NYPD conducted stop-and-frisks 684,330, the highest total since the department began collecting stop-and-frisk statistics in 2002 and a 603 percent increase since that year. About 87 percent of those stopped and frisked were black or Latino.

“This report, I think, makes it very clear that it is time to end this policy of stop and frisk as presently constituted,” Mr. Stringer said. “Communities of people who are caucasian, people who look like me, never worry about their child or grandchild going to the store for a glass of milk. They’re not worried about the police, they welcome the police on their street corner.”

Mr. Stringer, a likely 2013 mayoral candidate, asked Mayor Bloomberg to “step out of the shadow” of NYPD Commissioner Ray Kelly and lead on this issue.”

“Mayor Bloomberg, you’ve done some great things and we’re very proud of Commissioner Kelly, but we must ask you now to stand up and say something,” he said.

“First, as a human being to another human being, I want to wish Mayor Bloomberg a happy birthday,” Mr. Williams said. “Now we’ve got to get down to business, because the mayor, on this issue and as it relates to communities of more color, I believe he’s doing a terrible job.”

The NYPD has defended stop and frisk by saying the policy helped them take about 800 guns off the street. Mr. Williams suggested gun buyback programs would be a more effective alternative.

“Any time you hear that a young, unarmed person was killed, you can bet everybody’s bank account here that they were black or latino,” Mr. Williams said. “There are more guns taken off the street by gun buyback programs. Where are the monies for those programs?”

Kirsten John Foy, the director of community affairs for public advocate and likely 2013 mayoral candidate Bill de Blasio, was also on hand at the press conference to read a statement on Mr. de Blasio’s behalf.

“There is a place for stop and frisk in our police tactics, but not on the scale or in the way that the NYDP is using it today. If we are truly going to be committed to convincing communities around this city that law enforcement are partners with communities, we have to reign in this policy,” the statement said.

The NYPD has argued minorities are targeted for stop-and-frisks more often because the majority of criminal suspects are black or latino. Mr. Williams dismissed that rationalization.

“You can quote me on my answer, that’s bullshit,” he said. “If that was the case, we’d see every white man with a suit stopped–and with a briefcase, because they may be committing a financial crime.” 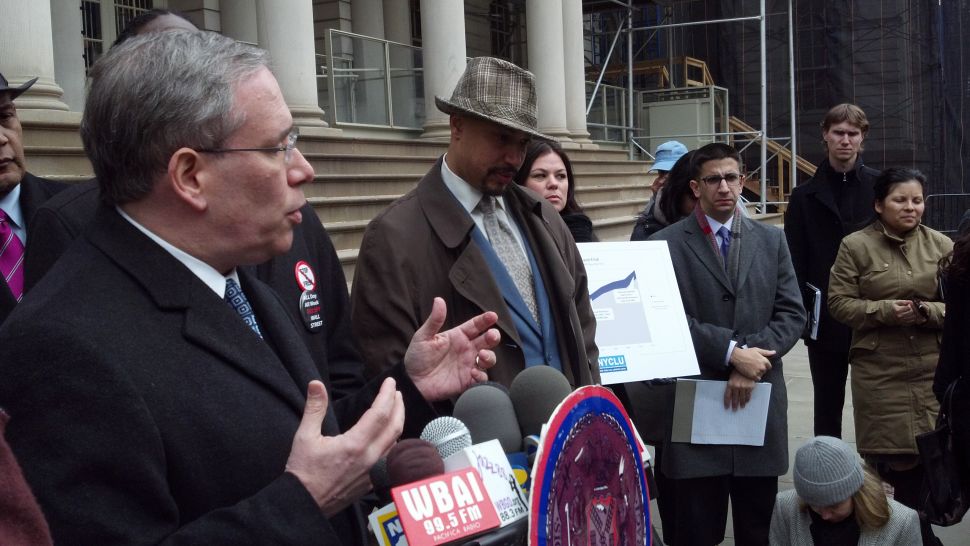