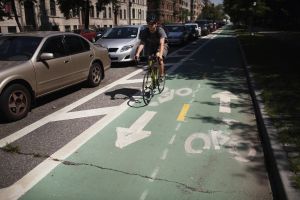 NEW YORK, NY – AUGUST 17: A man rides his bike along a controversial bike lane next to Prospect Park on August 17, 2011 in New York City. In what is being viewed as a victory for the Bloomberg administration, a judge on Tuesday dismissed an effort by Brooklyn residents to remove a bicycle lane installed by the city on Prospect Park West. Mayor Michael Bloomberg, along with his transportation commissioner, Janette Sadik-Khan, has attempted to make New York more bicycle and pedestrian friendly with numerous bike and pedestrian lanes around Manhattan effort has angered some in the city who see the lanes as adding to traffic, taking up parking spaces and giving more power to bicyclists. (Photo by Spencer Platt/Getty Images)