A glitter-wielding activist fell afoul of Republican presidential candidate Mitt Romney’s new Secret Service protection detail in Denver on Tuesday. As the former Massachusetts governor worked the crowds after a speech, someone attempted to throw glitter on Mr. Romney, but he was quickly hustled aside by Secret Service agents. The glitter-throwing activist was removed from the event.

The Huffington Post notes that all current Republican candidates have been targeted for festive protest in the past.

Glitter bombers, according to Yahoo! News, are often motivated by a target’s opposition to core progressive issues such as gay marriage. Heather Cronk, managing director for Get Equal, a gay rights advocacy group, told Yahoo! that part of the motivation behind the action is “to cut through the white washing of these folks’ records.”

The glitter attack was perhaps the cap on a bad night for Mr. Romney, who lost primary votes in both Missouri and Minnesota to challenger Rick Santorum. 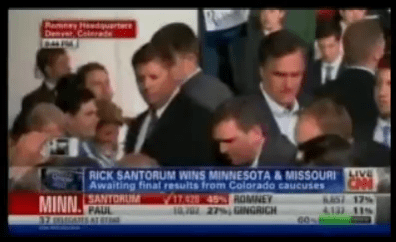