TRENTON – The Senate moments ago began debating marriage equality, or Senate Bill S-1, which is expected to pass the Senate today and subsequently get vetoed by Gov. Chris Christie.

“It’s silly that we have to debate something as elementary as equal protection under the law,” said Senate President Steve Sweeney (D-3).

Marriage is not about religion, said the Senate president, the prime mover of the bill. Society cannot force some churches to marry same sex couples, but neither can a wise government allow religious communities to push their beliefs on secular laws, Sweeney said.

“We listened to hours and hours of heart wrenching testimony (to that effect),” said Weinberg, referencing civil union laws.

“It’s time for New Jersey to get on the right side of history,” she added. “The marriage of two committed, consenting people in love should make zero difference to the rest of the world. …The state should not be in the position of legalizing homophobia.”

Democrats expect to gain two votes today from the Republican side in favor of this bill. Senators Jennifer Beck and Diane Allen are expected to buck the GOP line and side with the majority Democrats.

Weinberg urged others to do the same.

“Stand up to the governor,” said the senate majority leader. “With enough votes, we can override the governor’s veto. For my part, I will cast my vote for love.” 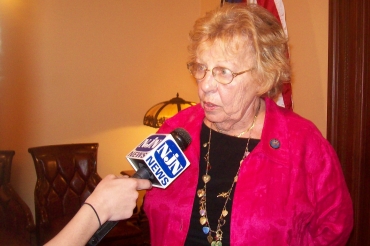