Is that a whiff of bubblegum and stale beer?

Merchandizing! It’s as natural for the world of professional sports as it is for a Kardashian (or anyone else who sleeps with a member of a professional sports team). Jerseys, hats, kosher hot dogs (actually, scratch that last one), baby clothes…these chintzy, overpriced gifts make up a major part of the revenue for any red-blooded American league.

That’s not to say that there haven’t been missteps in marketing over the years. (Nascar scrubs, anyone?) And last night, going to the fragrance launch of The New York Yankees (and the more feminine The New York Yankees for Her) over at Catch Roof, we were expecting nothing less than a full-on flop. Why would anyone try to bottle and sell the rank sweat of a baseball stadium? And what women in her right mind would buy it?
“Obviously there are women interested in the Yankees as well,” said Dennis Keogh, Senior VP of marketing for The Cloudbreak Group, which has been working with the Yankees and MLB to develop the new fragrance. “On any given day, 30-40 percent of the stadium is filled with women, and it’s actually the fastest growing segment of Yankees merchandize. We actually have a whole store dedicated to women’s apparel and accessories.”

Honestly, we could see the male cologne selling in its classy black bottle; evoking a scent not unlike a spray-on version of Old Spice.

“This is what Alex Rodriguez‘s pheromones smell like, right?” we asked, sniffing.

“No,” said Mr. Keogh. “We didn’t want to base it on any one player. People should be able to project whoever they want onto this: Babe Ruth, themselves. It’s the idea of the Yankees an iconic experience that we’ve tried to capture.”

“This is a sparkling gourmand,” said Mr. Keogh, spritzing the perfume, which came in a pink bottle. “It’s got fruity notes on top, and dries down to the sanctuary notes… for the more alluring side.”

To us it smelled like a combination of vodka hidden in plastic water bottles and bubblegum, so that was about right.

The New York Yankees fragrance will be available for sale at Macy’s and Yankees Stadium the first week of April, and its launch will be accompanied by several in-store special guest appearances. Though Mr. Keohe couldn’t tell us who the secret celebs will be, we’re assuming it will be Derek Jeter, and he will be bringing us gift baskets of signed baseballs. 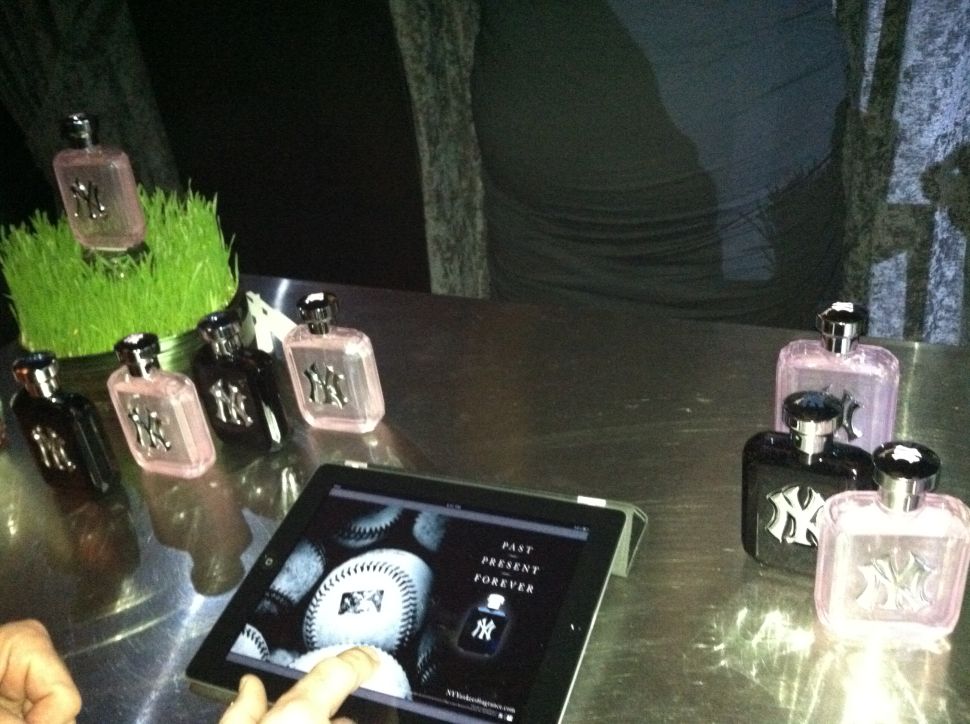