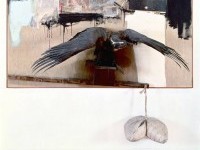 Here’s a messy one. Art lawyer Ralph E. Lerner, who represents the estate of the late art dealer Ileana Sonnabend, is suing the Internal Revenue Service over a $65 million estimate that the tax collector placed on Robert Rauschenberg’s seminal Canyon (1959),which is owned by the estate, Forbes reports. Mr. Lerner and the estate argue that the work should be valued at $0 since the inclusion of a stuffed bald eagle in the work means that, under U.S. law, it is illegal to sell it.

Mr. Lerner told the magazine that the IRS informed him “a recluse billionaire in China might want to buy it and hide it. … It’s bizarre. It sounds like a James Bond movie.” The IRS has long argued that it can “tax stolen or illegal items in an estate based on ‘illicit market’ value,” according to the magazine. (The IRS has declined to comment.) But, as Mr. Lerner pointed out, the estate is not preparing to break the law by selling the work. It is now on loan to the Metropolitan Museum of Art.

Interestingly, possessing a stuffed bald eagle—even one attached to a celebrated painting—is illegal under current law, though Ms. Sonnabend obtained a special waiver in the 1980s to allow her to keep the work and loan it to museums.

The Sonnabend estate has already paid a sizable tax bill, Forbes notes, giving some $331 million to the U.S. and $140 million to New York state. To cut those checks, the heirs sold off a sizable chunk of that collection in a deal believed to be worth $600 million that involved Larry Gagosian and GPS Partners, the firm of Franck Giraud, Lionel Pissarro and Philippe Ségalot.