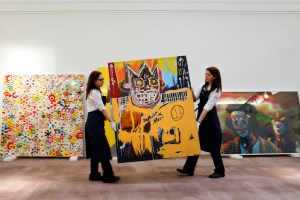 Sotheby’s London recently discovered that a work by Jean-Michel Basquiat, set to go on sale at its contemporary auction tomorrow, was secretly signed by the artist in invisible ink.

Orange Sports Figure (1982) is expected to go for $4.7 million to $6.2 million, though the signature was only recently detected thanks to an inspection under a black light bulb, according to the AP.

She said staff were initially “surprised, astonished and puzzled” by the signature, which appears to have been written in the type of pen used to mark banknotes.

The discovery seems to have been previewed in the lot’s catalogue notes, which read partially:

This artistic confidence is flagrantly brandished via the inclusion of a dollar sign parallel with the crown alongside the use of resplendent gold paint – an alchemical inclusion Basquiat referred to in an interview with Henry Gelzahler in 1983: “I was writing gold on all this stuff, and I made all this money right afterward” (the artist in: Henry Gelzahler, ‘Art from Subways to Soho’ in: Exhibition Catalogue, New York, Tony Shafrazi Gallery, Jean-Michel Basquiat, 1999, p. 48). As though printing his own money, Basquiat’s work during 1982 presents an ironical retort to the gallery culture of high art.

Basquiat signatures are not common, as the artist is best known for signing his work with a crown or with his graffiti tag SAMO.