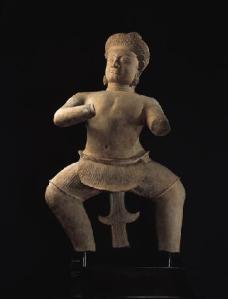 At the request of the Cambodian government, the Department of Homeland Security has opened an investigation into the provenance of a Cambodian statue that rests in uncertain terms at Sotheby’s, The New York Times reports.

The statue, a 5-foot-tall 250-pound sandstone wrestler, one of a pair of combatants, in elaborate headdress that dates from the mid 900s, was pulled off the auction block last March when the Cambodian government claimed it was “illegally removed.” [Pictured here is the sculpture that is believed to be the other one in the pair].

Severed from its feet and pedestal during the unsettling period of the Vietnam War, the statue was acquired by a “noble European lady” in 1975 and has a catalog estimate of $2-3 million.

Sotheby’s asserts that there’s no proof the statue was illegally taken though archeologists claim all signs point to the plunder of the tumultuous power struggles in the 1970s when the Khmer Rouge hacked and pillaged the temples of Cambodia.

The dispute over this relic reveals the quagmire that is invoked when antiquities whose pedigrees are unresolved go up for auction.