Christie is scheduled to appear at Memorial High School at 11 a.m., according to sources in West New York.

The timing reveals the governor’s willingness to stand with Roque as the mayor tries to fend off Democratic Party outrage over his decision to back Christie’s friend, Kyrillos, a Republican, over local legend Menendez, a Democrat.

A source close to preparations for the governor’s arrival said the city wants to buy the old St. Joseph’s School, and plans to lean on Christie’s support for the project.

In the aftermath of Roque’s endorsement of Kyrillos last week, the mayor’s allies groaned that West New York would potentially lose federal funding as punishment for the mayor’s cross-the-aisle declaration.

Local politicos interpreted Christie’s decision to parachute into the city to be with Roque – who literally cut short a Mexican vacation to get here in time for tomorrow’s event – as a signal of the governor’s staunch dedication to the renegade Democrat. 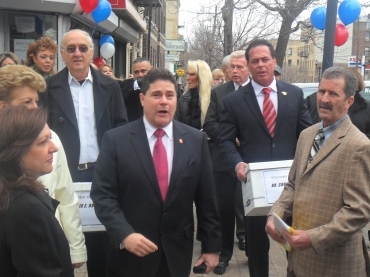