Left for road kill in the aftermath of redistricting, Rodriguez regenerated on Roque’s local renegade ticket, an extended political life that right now appears to have turned very precarious.

A longtime ally of U.S. Rep. Albio Sires (D-13), Rodriguez allegedly endorsed Menendez as a counterweight to the mayor. Sources say Roque didn’t like the commissioner issuing an endorsement without first consulting him and the other commissioners.

Tonight, the mayor and other three commissioners intend to pull Rodriguez off oversight of the powerful revenue and finance department and reroute her to something less relevant as punishment, say sources.

As she gets it on one side locally from a governing body that rose to power in opposition to the Hudson County Democratic Organization (HCDO), Rodriguez must also tread carefully in the presence of the county establishment. 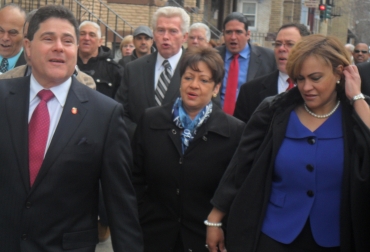